Helen Addison-Smith is a writer and academic based in Melbourne.

We’re in the hills above Melbourne, in a school hall, filled with light and locals. They chat about cheese and wine and touch each other lightly on the shoulder, just so, as they laugh. It’s like Gourmet Traveller has come alive and for once, I’m allowed inside it.

There are a good deal of wedding rings and R.M. William’s boots and quality brogues on the ladies in here. Working dogs and European off road vehicles are parked outside. There’s an artisanal brewery two doors down. 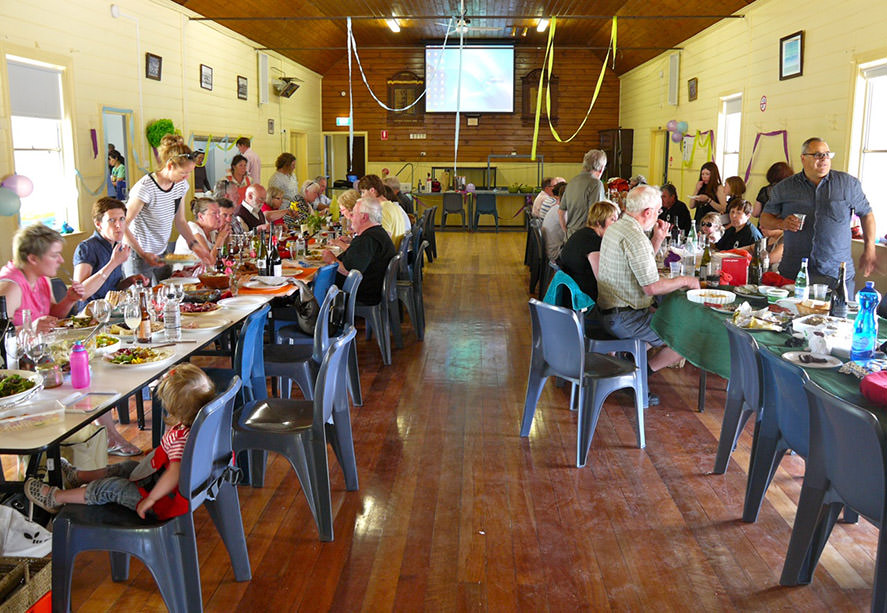 I wander in, dressed all in black, with my seven year old rainbow sparkle daughter and a man that I know, sometimes. They greet us as family, and we don’t contradict them. We’re blending in, trying to adapt to the local environment.

The locals are friendly. The ask me where I am from, and I tell them that I’m from Melbourne, but I’m moving up to the country real soon. Real soon. We try to work out the distance between where they live and where I will live. They tell me who they know in that town. We make little geographies of peoples and places.

The tables are littered with dead feral rabbits. Skinned, gutted, cooked. Made into pies and terrines. Smoked and minced and boned and pulled and put into a brioche bun. This is a competition, and the person who has done the most delicious thing with a dead feral rabbit wins. Someone gives me a plate and I wander around, picking at this and that, breeding small talk that escapes me sometimes, and runs round the room, looking for a place to hide. 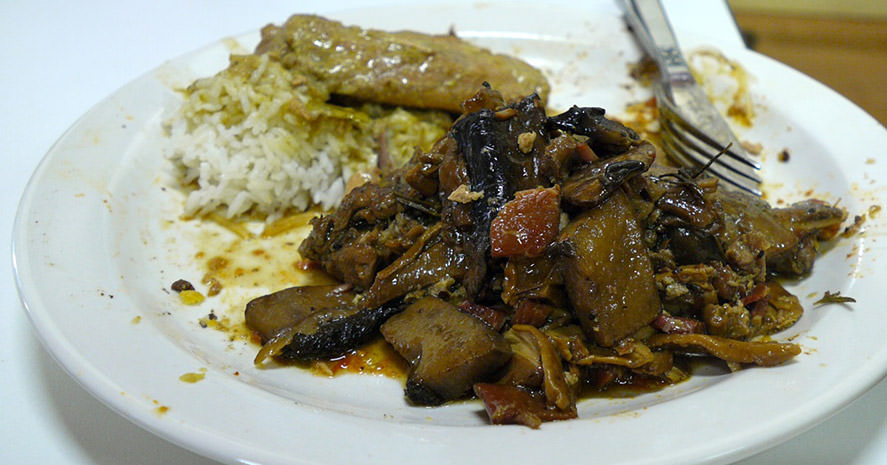 My daughter starts to cry when I begin eating the rabbit. She’s on the side of the Flopsy Bunnies. She thinks I’m as bad as Mr McGregor.

"One, two, three, four! five! six leetle rabbits!" said Mr McGregor as he dropped the Flopsy Bunnies into his sack. The Flopsy Bunnies dreamt that their mother was turning them over in bed. They stirred a little in their sleep, but still they did not wake up.

Mr McGreogor picked up the sack, and carried it off to the house. He threw it down on the stone floor.

"Don't you be silly; what do you mean, you silly old man?" said Mrs. McGregor.

Mrs. McGregor took hold of the sack and felt it. She said she could feel six, but they must be old rabbits, because they were so hard and all different shapes.

"Not fit to eat; but the skins will do fine to line my old cloak."

"Line your old cloak?" shouted Mr. McGregor—"I shall sell them and buy myself baccy!"

"Rabbit tobacco! I shall skin them and cut off their heads."

There’s a man sitting across from me, in a striped shirt that barely makes his belly seem respectable. His jeans are clean and his boots are shiny and he’s getting genteely hammered on local artisanal wines. We talk about rabbits, how you go after them with ferrets, drop one down the burrow, and then, when the rabbit runs out, blow their heads off with a 45. I wonder if he would like to fuck me. I’ve never fucked anyone who has killed a mammal. On purpose. 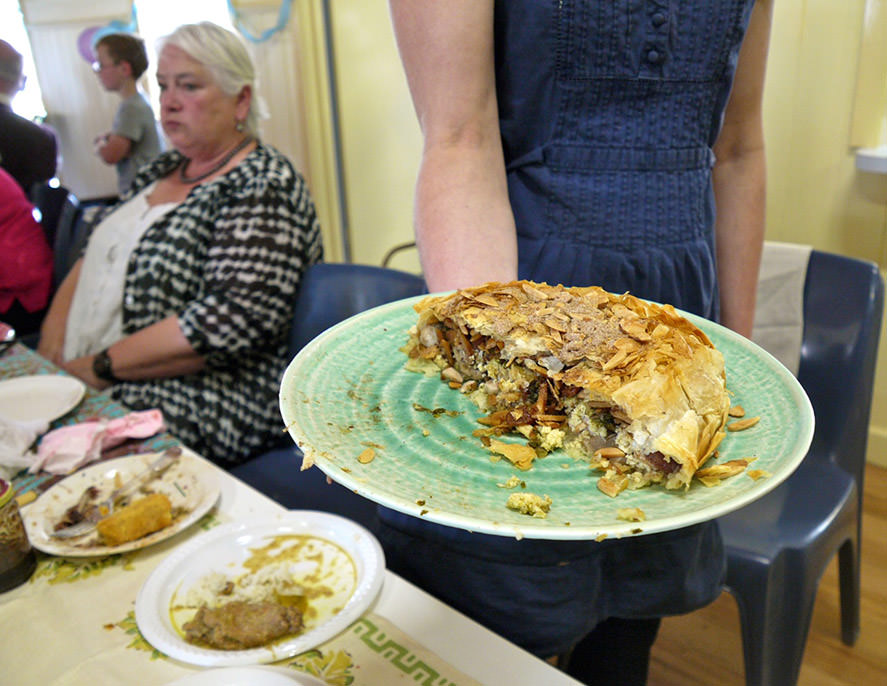 I win a couple of bottles of wine in the raffle. He leans over to me and says “Not bad for a blow in”. That’s what the locals call people like me, tree changers, professionals with telecommuting jobs in IT or education who watched the Good Life one too many times and moved out to the hills to create community and ferment sauerkraut and get involved in kefir making workshops and talk probiotics and reconnect with their prana and do yoga and meditate and go to the naturopath and go to the Steiner school and eat locally sourced goat’s cheese and chorizo and make short films and work on their performance art and to inflate the real estate market. The locals are suspicious. We are changing their native habitat. 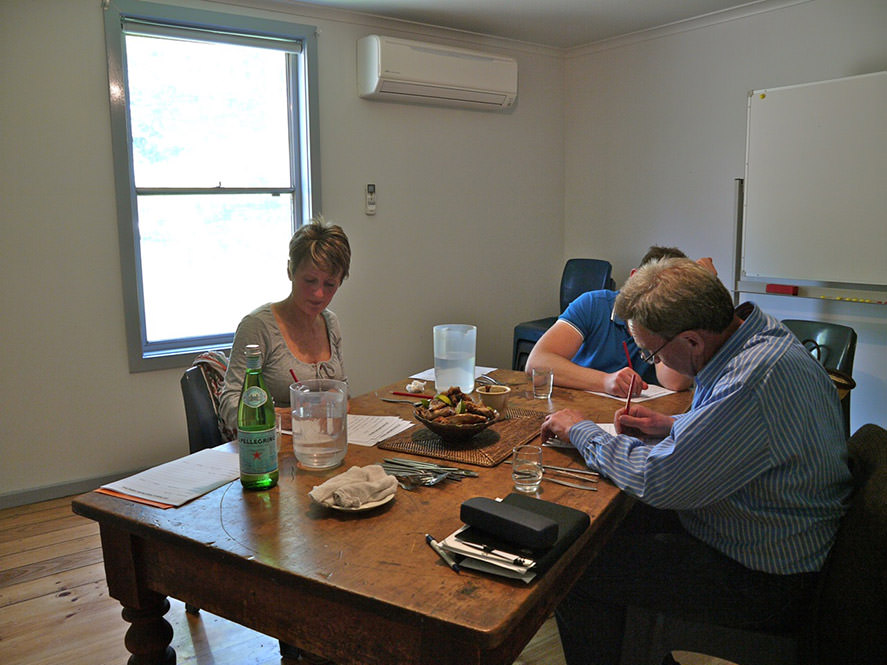 It is time for the results of the judging to be announced. It is Eleanor who has won the prize for the best rabbit dish. And it is also Eleanor who organized the event, so there’s a bit of booing as she comes up to get her prize. The MC asks her “What’s your secret”? Eleanor grabs the microphone and says “This is my secret. Cover your children’s ears”. 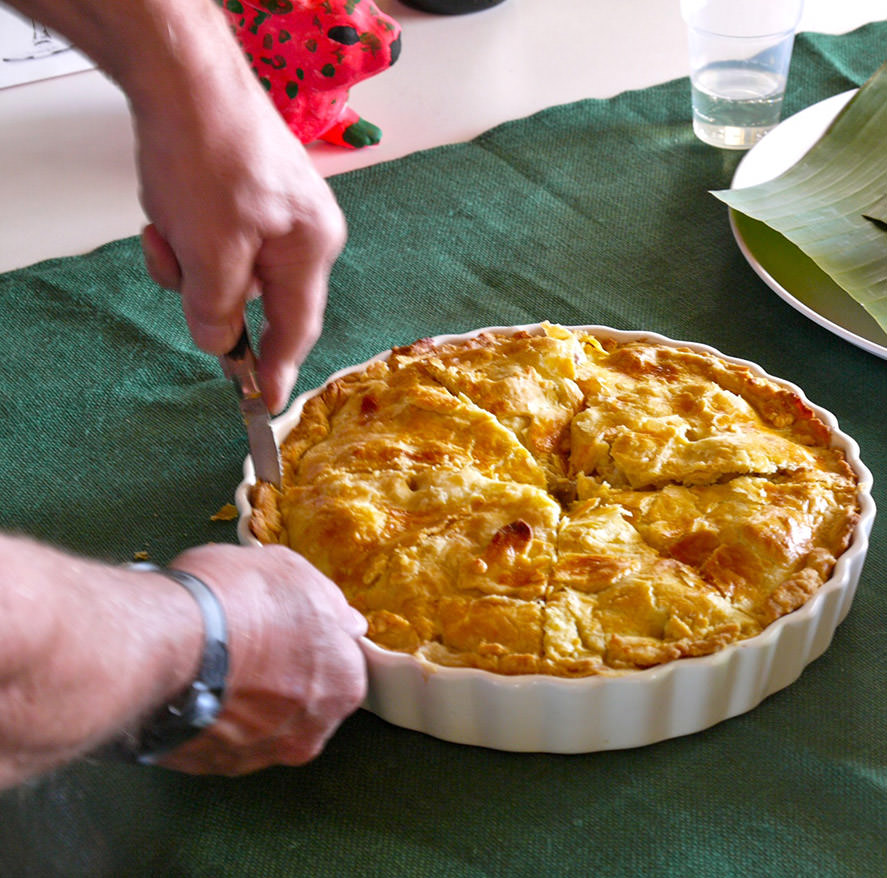 It must be small.

So ask your hunter to get kitten rabbits.

He or she will most likely use a ferret, not a gun.

Skin and gut the rabbits, discard the head and feet.

Joint the rabbits into:

Two back legs to hip joint

Two forelegs with a couple of ribs attached

Saddle with balance of ribs attached

Bring the meat to room temperature before cooking on a hot BBQ.

Cook quite quickly, and rest the meat for at least 15 minutes before eating.

Present the dish with a spicy plum sauce for dipping. 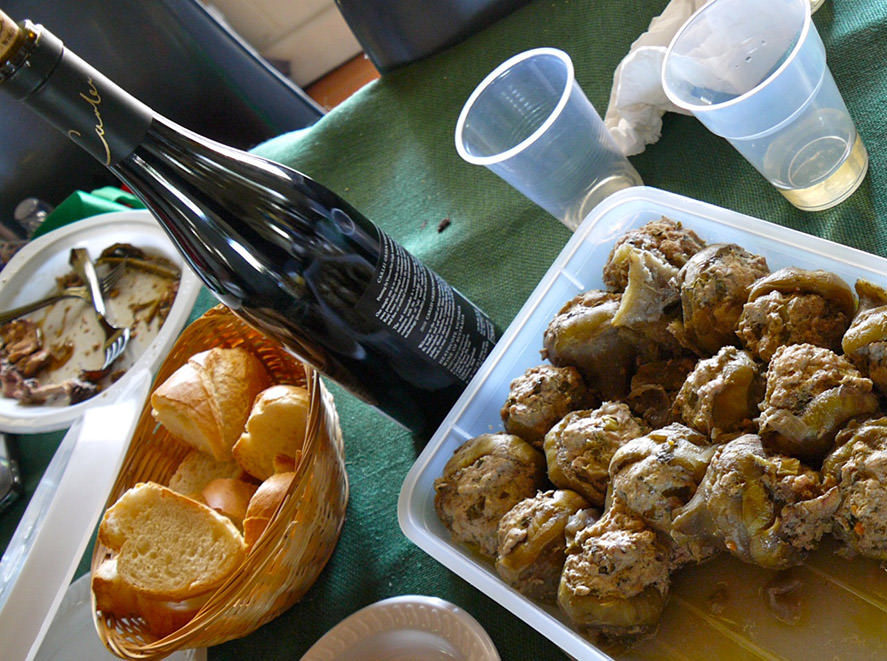 Rex is the man to get rabbit skins from. He lives next to the church and has a front yard full of roses and an Australian flag. In his backyard is a cord of wood and a cut down water tank filled with ferrets. Any tidy town would be proud to have him. 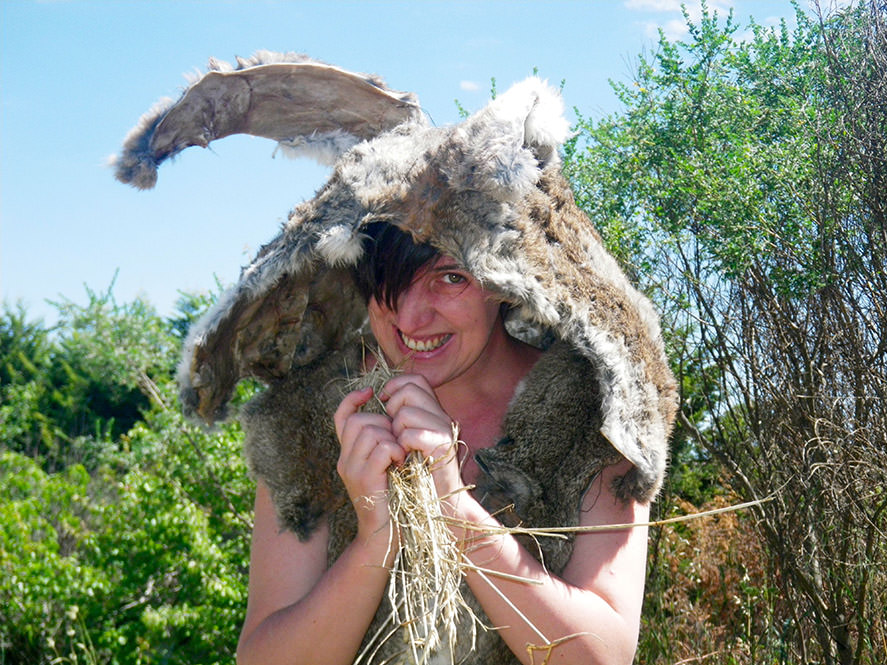 As I talk to Rex, I thicken up my accent. The country comes out. My sentences go up at the end. I say ‘eh?’

In his garage are bags filled with rabbit skins, dried out, folded like books. He opens a bag and it smells like mothballs.

“You like that smell?” he asks me. “I like it. They say it gives you cancer now.”

“You can’t leave the rabbit skins in the fields,” he says. “The cows chew on them. And you can’t put them in your bin. Council doesn’t like it. There used to be a fella who bought them for $5 a kilo. But he doesn’t come any more.”

“Never liked school,” he tells me. “Always used to run off and hunt rabbits.”

“Once we made stole for m’sister out of a fox we caught” he tells me. “Beautiful fur. Couldn’t do that any more. Greenies wouldn’t let you.”

“No one gets married any more,” he tells me. “Everything’s changed”. 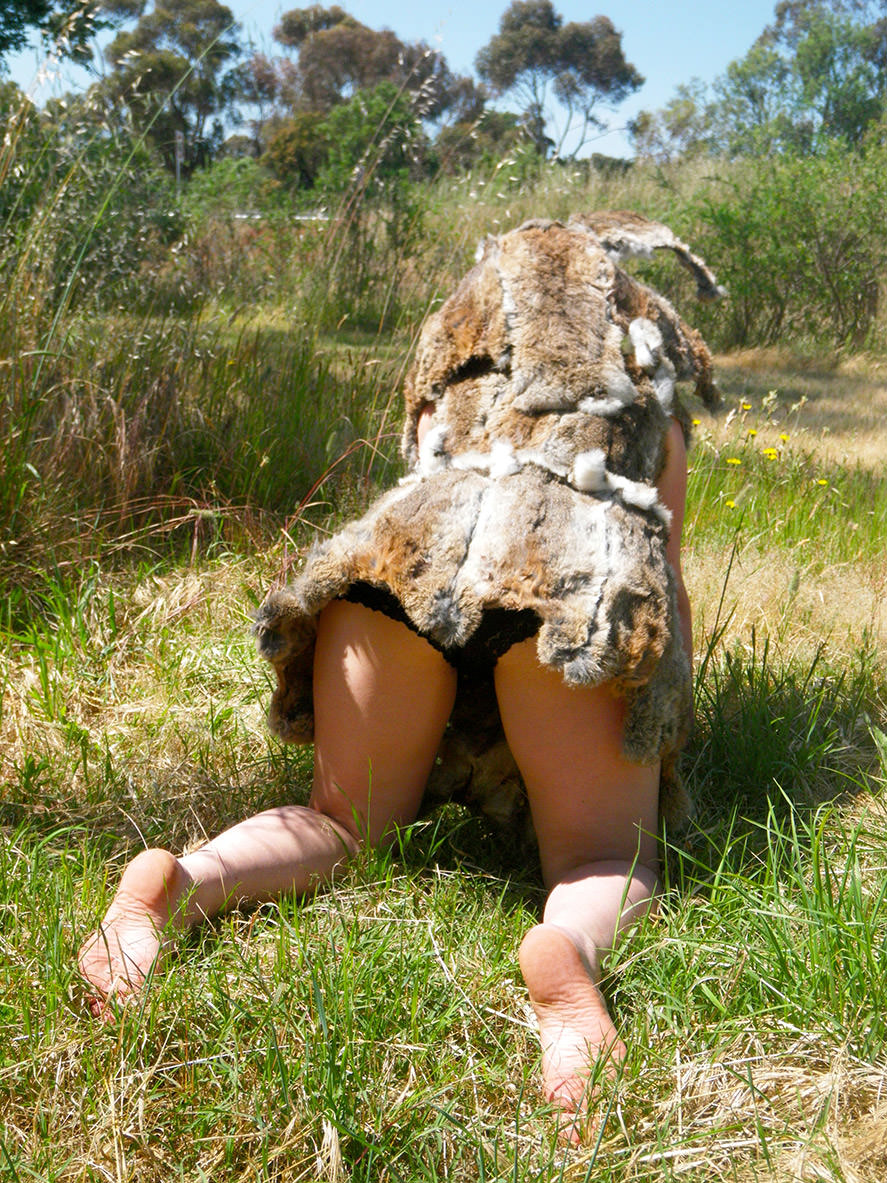 He pats my daughter on the head. “She’s a little pet, isn’t she?”  We’re standing looking inside his tank of ferrets. He pulls out a long wire crook and dips it into the tank, hooking it around ferret’s neck and pulling it up for a pat. “This one is a little pet too,” he says. “Looks at those teeth. Look at ‘em. But she wouldn’t bite you. Nah. But if you were a rabbit. . . .” 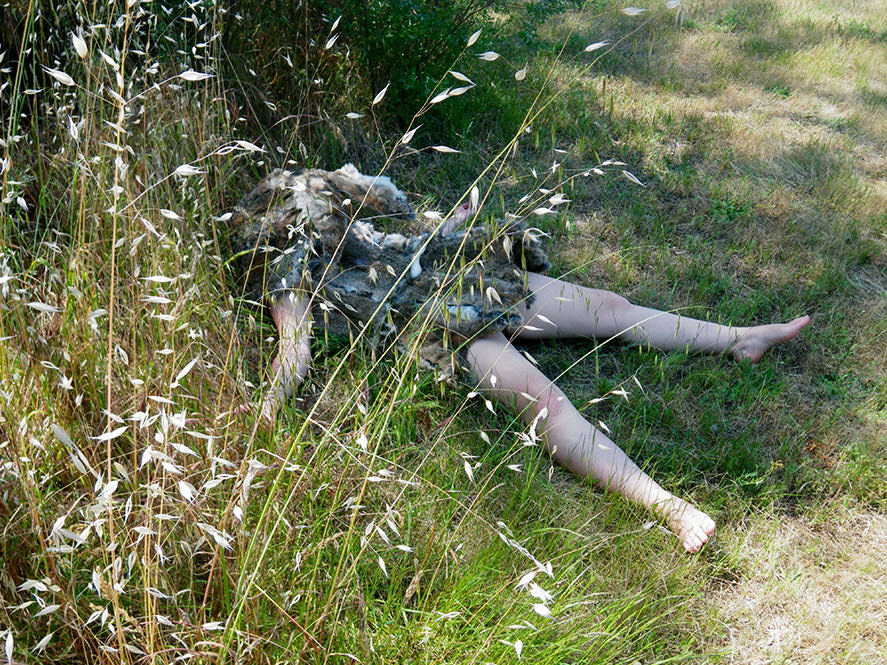 He feeds his ferrets on kangaroo meat. He has a licence to shoot kangaroo on his property. He doesn’t have a licence to sell rabbit meat, but he still does it. He just doesn’t put a sign out anymore, after one of his friends was taken to court for selling illegal meat.

He remembers mixematosis. “It’s a cruel disease. Terrible. You’d see a rabbit just sitting there, swaying, and then you’d come back in a couple of weeks and it’d still be there. We’d shoot ‘em in the head. It was the kindest thing to do . . . . still something had to be done because of all them rabbits. Back in those days, we used to catch ‘em by just stretching out a bit of net and walking up the hill and pushing ‘em into a yard. One day we caught 612 pair. 612 pair!” 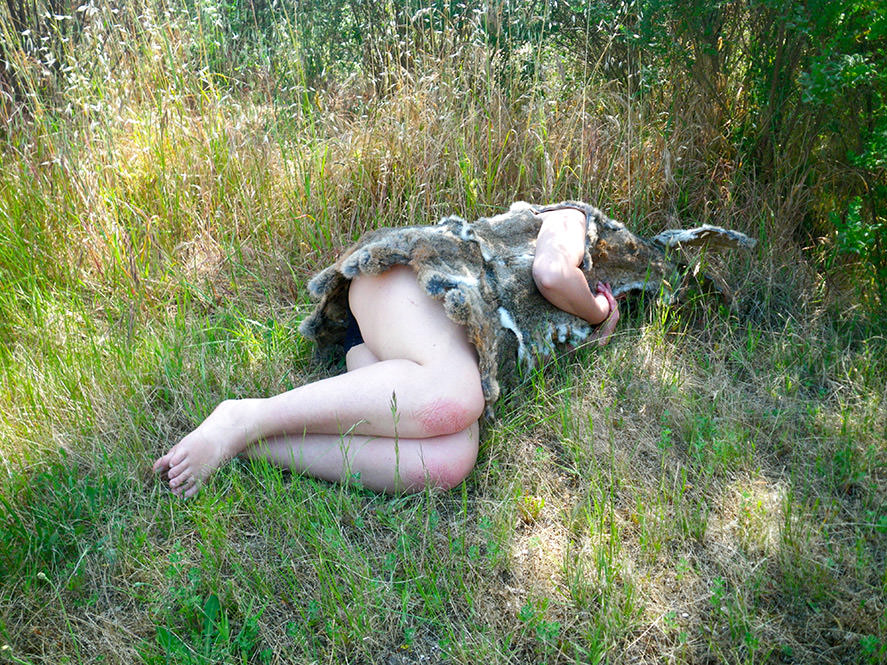 One day, when Rex is sleeping, I’m going to sneak inside to his house and quietly start to live there. Maybe behind his brown chenille couch. Or in his wardrobe, behind his best suit, the one waiting for his funeral. Or beneath his or his wife’s single beds. The three of us could sleep together, them on top, me underneath, and with their solid country love above me, I’d sleep undisturbed by big city dreams. And then in the day, quietly, quietly I’d watch him chop wood and prune roses and mince kangaroo meat and skin rabbits and fix toasters. I’ll watch his wife make scones and tea and write letters in copperplate handwriting to all of their grandchildren. One day he’d find me, though, for sure. And when he finds me he’ll know it’s not right for me to be living out there with him in the country. I can’t chop wood or skin rabbits and my scones are not the best. So he’ll throw a sack over me, and chuck the bag into in the back of his truck and drive me back down to my native habitat. He’ll pull over on Sydney Road and give me a quick pat on the rump to help me on my way. But as I scurry back into Savers, I’ll be planning how to get back to those hills.

I’m sitting on my beanbag with a pile of rabbit skins. I’ve cured them with Kerosine and bicarb and my flat smells peculiar. I have a needle and thread and I need to push the needle with all my might to get through the skins. I’m watching RuPaul’s Drag Race: Good Luck! And don’t fuck it up says Ru. On the screen, the drag queens are hot glue gunning their wedding dresses, and in my living room, I am covered in fur and gritting my teeth. Before I got the rabbit skins, I imaged myself making a cute little fur bikini out of them. Or maybe I’d look like the Ygritte, the hot Wildling spearwife out of Game of Thrones. But it turns out I’m making something that looks more like a museum exhibit. It’s alright. My needle and thread know what they are doing and I stitch and watch the bitching on the television.

I’ve been reading George Monbiot’s book Feral: Enchantment at the Frontiers of Rewilding. In it, he talks about creating a ‘richer, rawer life’, one where we activate our wild natures again in the everyday, about how we ourselves need to go feral. He tells a story about walking in the woods and finding a dead deer. He hoists the deer on to his shoulders and walks with it back home. His body feels right, like it is doing what it was designed to do. And here I am stitching the skins of other animals together, making the clothes the way that humans have for so very very long. Maybe my needle should be made out of bone rather than stainless steel and the thread be strips of leather not polyester, but still, it seems so familiar. It’s genetic memory, I think. I am in touch with all of the women that came before me, the nameless ones, the useful ones that made and did and make did. But the air is thick with Kerosine fumes and I’ve pulled the curtains and shut the doors so that my neighbours don’t know I’ve been curing rabbit skins in my flat.

And May the best woman win! Ru Paul exclaims.

I finish stitching and turn the suit over to the non furry side. I rub hand lotion into the leather to make it more flexible.

I’m trying, but I don’t really feel like a nameless ancient woman. I feel like Buffalo Bill from the Silence of the Lambs. It rubs the lotion into its skin. It does what it is told. It’s just that I’m not making a woman suit, I’m making a feral suit. But still, I’m making a suit, and a suit is something that you can take off 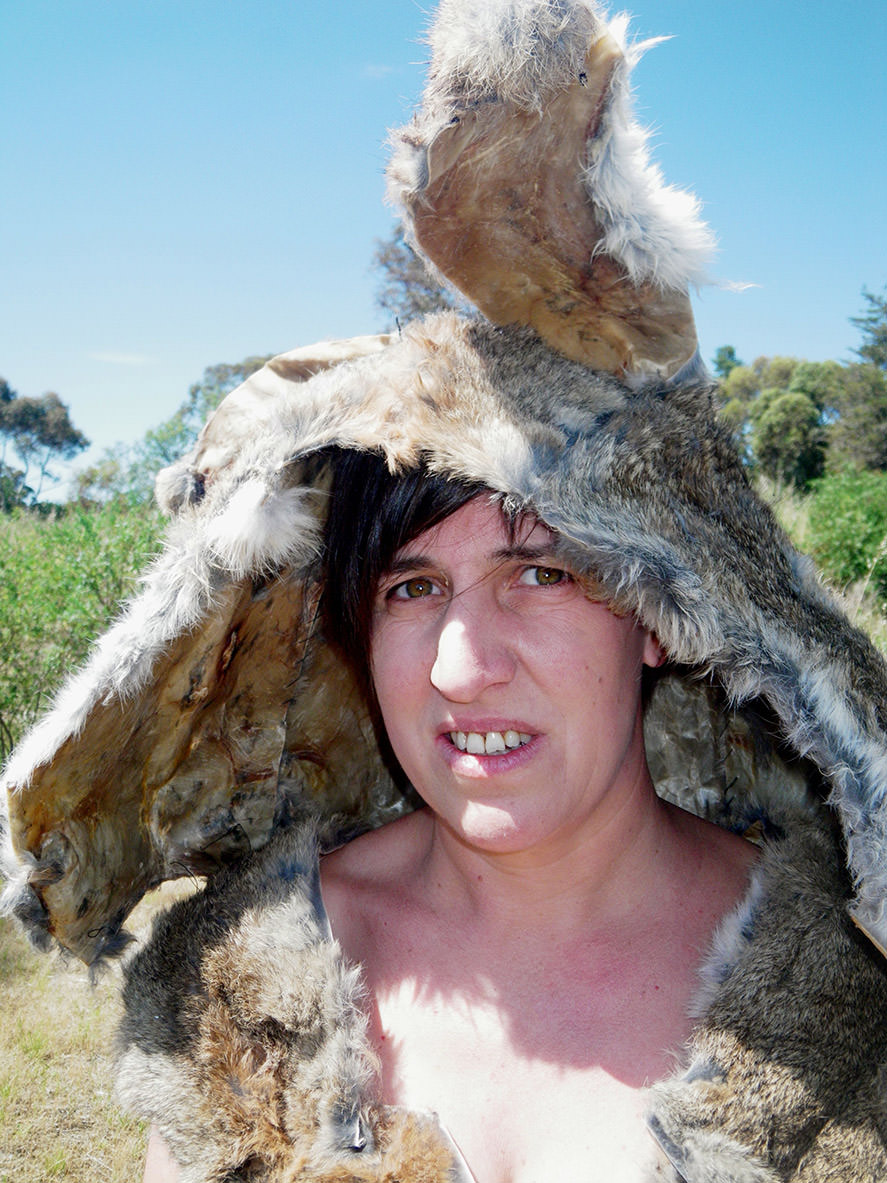