Michael Graeve is a sound and visual artist based in Castlemaine, Victoria, and a Senior Lecturer in the School of Art at RMIT University.

The moment of the space that was elsewhere becomes here quickly a profusion now. One becomes many. Links are broken, then awkwardly mended, thus imperfectly rendered. The question of representation. Those questions of representations. Crossings of sorts, too, falling into focus, or out of line, registering and deregistering. A relation, a-relation, a re-relation, a composite, an opposite, a plethora, a profusion, an allusion. Being located between spaces, in spaces, across spaces. Across purposes and across actions. It comes to hold a moment here only to evade us of the moment there.

Now we have a sequence of overlaps and overlays. Of delays and relays. Recordings from a gallery set in a semi-rural, semi-industrial location. A space filled with record players rumbling and tumbling, two dozen loudspeakers conjuring a complex mechanorganical surround in the interior. Thresholds between inside and outside, between artificial and natural, between technical and animal, between fake wood and real wind. Walk-throughs. Seatings and movings. All this, and more, now displaced to the Yarra Sculpture Gallery. Placed within earshot of traffic, with doublings-up of that traffic, and triangulated inside framings, with layers of angles. A rendering of moments and actions and dislocated spatial propositions.

May 2020, this text.
This text is an imperfect rendering of Rendered Imperfectly Rendered, which was created for Translating Ambiance, Yarra Sculpture Gallery, Collingwood Australia, 5-22 September, 2019, curated by Dr Jordan Lacey. If the spatial and sonic articulations were initially marked by proliferation and juxtaposition, then this text forms yet another.

One might listen to the linked sound documentation while reading the text. It features a 7'48" excerpt of a stereo-mix of a four-channel microphone recording which was recorded at ear-height as if seated on one of the chairs in the installation. 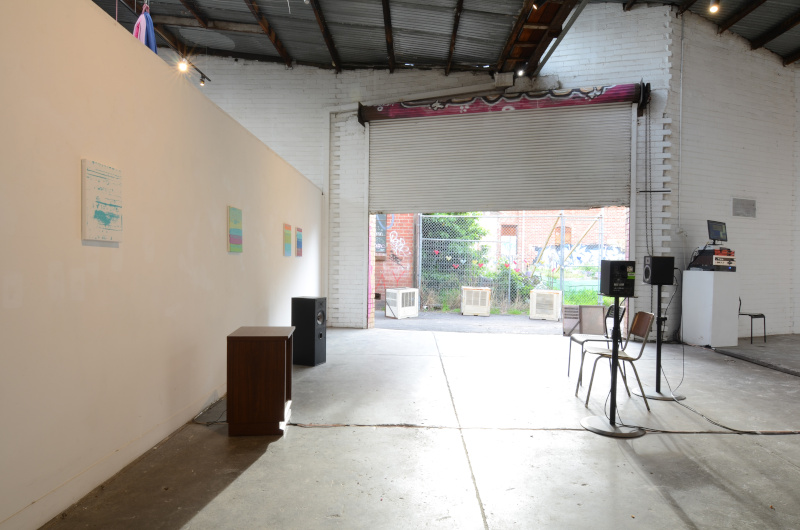 Wilderness appeared in early conversations around the curation, before submerging as landscape, place and location. We know too well that nature is a construct: sitting over there, it is likewise open to suggestion, intranslatability, instability, untraceability. Still more tempting might be the power of the wild guess, the wild disjunction, the wild card. Viewpoints and hear-points that only hint at the complexity of location and space and experience and address that combine. All as markers of what we so idealise in nature: activity out of our control, embodied experience out of our depth.

Wilderness, wildness, now wild multiplicity. Parallel but asynchronous narratives, though still perfectly timed? Think only of the introduction to Lejaren Hiller's An Avalanche for Pitchman, Prima Donna, Player Piano, Percussionist and Pre-recorded Playback (1968) "...The audience isn't gonna understand much of what I've got to say tonight, but they're damn well going to hear it" (1970). It sure is the last moment that does make sense. Or a composition with just plain too much multiplicity, John Cage and Lejaren Hiller's HPSCHD (1967-1969).1 Or consider chance procedures here, but also the joy of surprise, jumpiness, incomprehension. Juxtaposition and multiple mono, as opposed to stereo, as in the early tape works by Kenneth Gaburo (2000), though there are so many more examples.2 Of not being able to put your finger on it. Multiple languages obscuring rather than revealing; nothing congealing. How not to capture it all in one essence, rather in multiple traces? How in turn to build from it, outwards? Additionally addressing multiple senses, representational schema. Imperfection, awkwardness. If there is then a quality to experience, it may well sit within complexity. I don't aim for aimless evasion, but I do worry about representation. And I find that for me uncertainty is disarming.

Or of language and word not ever adequate. There are few greater joys than the difficulty of defining a colour, forget even articulating it. I first heard readings of Ludwig Wittgenstein's Zettel (2007) composed into Ben.Harper's Wandering Split (2002). Doubt piled on doubt, how could we ever agree on the colour red? No wonder that last century so tantalisingly played with the death of the author and chance procedures. When presented parallel narratives, how do we not consider the one as a relation to the other? Not translate, even if we can, should? The point is that they never quite come into focus. A near-Bergsonian un-composite of experience and movement?3 Or the narration of the unnarratability of sound, as might have Alison Knowles in her Frijoles Canyon (1991)? 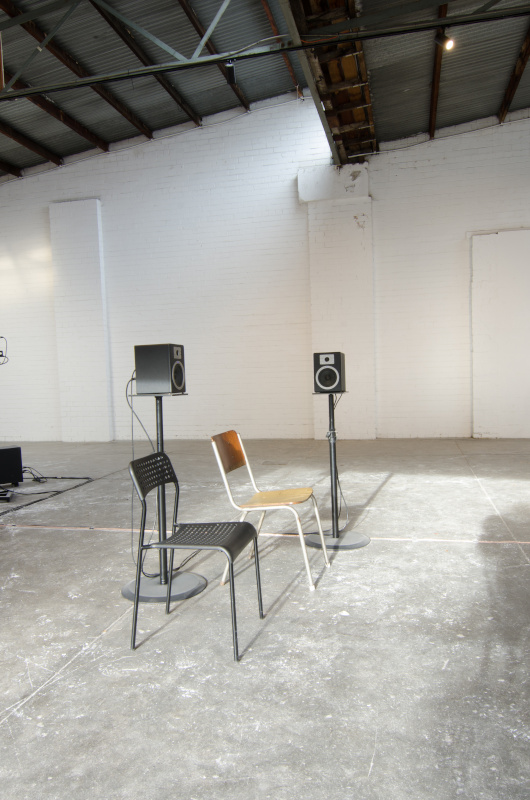 Two chairs, alternative listenings already. The ambivalent centre of the new location was hinted at by the chairs, by that marker of a place from which to hear and view. The meeting point of experience -- deliberate confluence where the four loudspeaker projections and also the visual address collide.

One ear closer to the open roller door, from where radiated ambient sounds arrive, Collingwood sounds, traffic sounds. And, oddly, alpine sounds: recorded then filtered through Jordan Lacey's installation. One ear further from the outside, yet hearing the outside fed through a roof-mounted shotgun microphone, relayed, played through a studio monitor. Again the above-mentioned sounds, but modulated through microphone, cable, loudspeaker. False stereo. Crossings.4 Spatially a hard left and hard right, but audibly a doubling-up of directness and traces linking across. Or as David Grubbs (2000) sings:

IF YOU SAY "TWO SHADES OF GREEN"

DON'T FORGET THE SPECTRUM IN BETWEEN

CALL IT A FIRMAMENT; IT WAITS TO BE SEEN 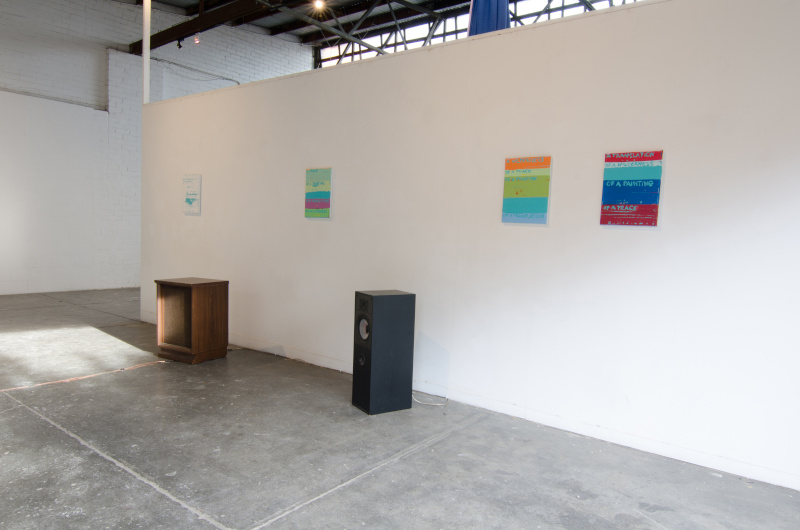 Stereo recording. Stereo track. Played from two mis-matched loudspeakers, 70's and 90's vintage. Stereo image is a representation already, unpairing the loudspeakers increasing the fallacy of the perfect, always already a degenerate.5 Imaging, stereo spread, these are all terms representing reproduction, even construction. Even high fidelity. Fidelity to constructs. Addressing the seats. Had I set up my own ambiance? Walk-ins, walk-throughs, walk-outs, fluid movements of presence through an earlier sound and painting installation at Castlemaine's Lot19.6 Periurban, bush, birds, rain, white walls, wood floor, clusters of sound gear biting ankles. Translations of crossovers between a sound installation and surrounds. That representation repeated as trace in Collingwood. 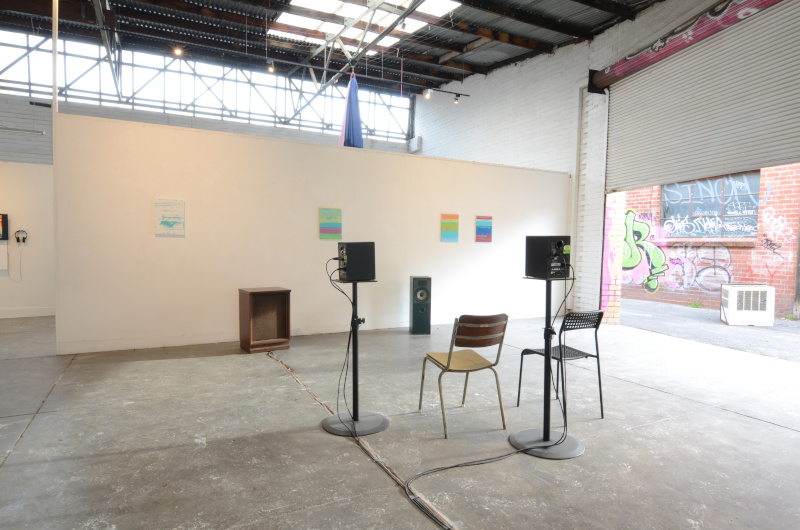 In turn 4 paintings. Three partly-finished paintings, four stripes done, gain each in turn one last turquoise stripe, plus the wordings. Sound always somewhat invisible, drawn into the surface, drawn into the colour. A fourth painting captures a trace of all of them (layered now, and mirrored now of course). The text "of a sound" is nearly invisible, carving only a contour into the glitchy surface. And then a painting which has touched all of them, thus reversed, tripled-up, removing the ridges and contours of the others. I was initially surprised by the request for paintings, given the brief, but hasn't painting for such a long time haunted the picturesque?

The wordings don't point to individual concepts so much as respective encapsulations. One within another. One after another. One relative to another. If it were a lens, the lens elements wouldn't work in consort. Out of focus, out of sync, out of line, out of shared purpose. A concrete formalist poetry -- all 120 possible variations implied. Are such potential variations sufficient? What acts on what? What acts on what in which sequence? Where to start and where to stop. If there were punctuation, where would it be? And if a flow of words, where to take a breath? The memories of before and the expectations of next, each trace a new relation.

Translation as most dynamically thrown into contrast when we experience how each part is subject to varied purpose and relation. 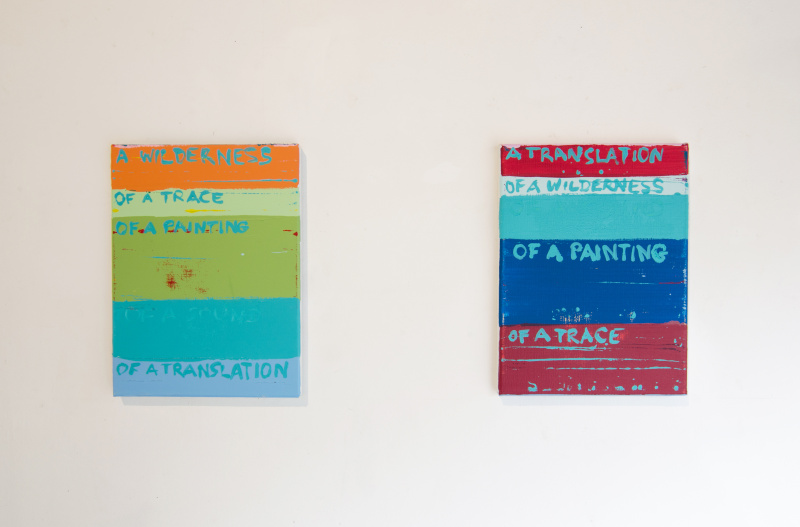 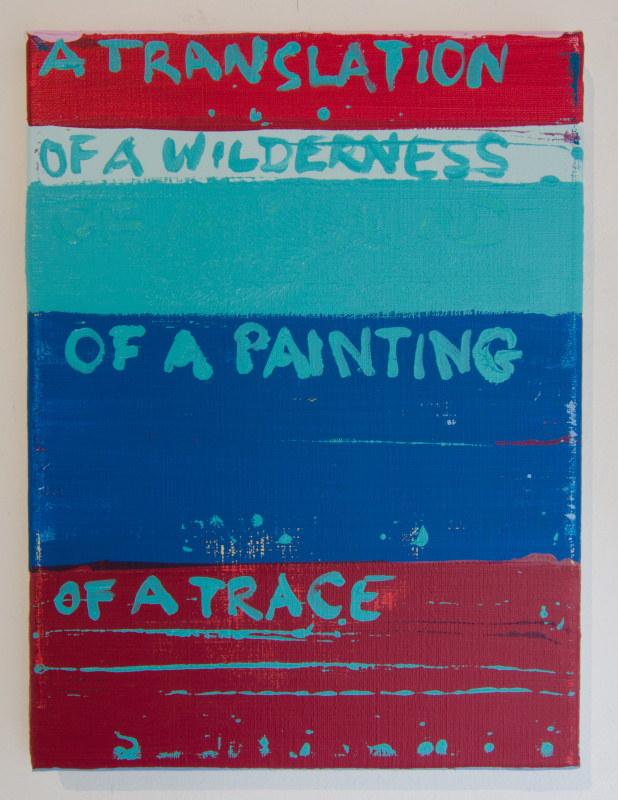 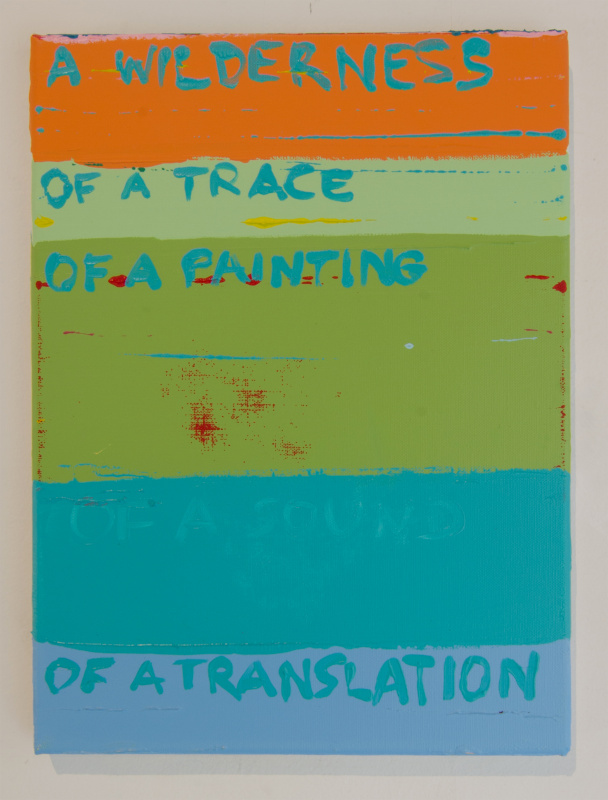 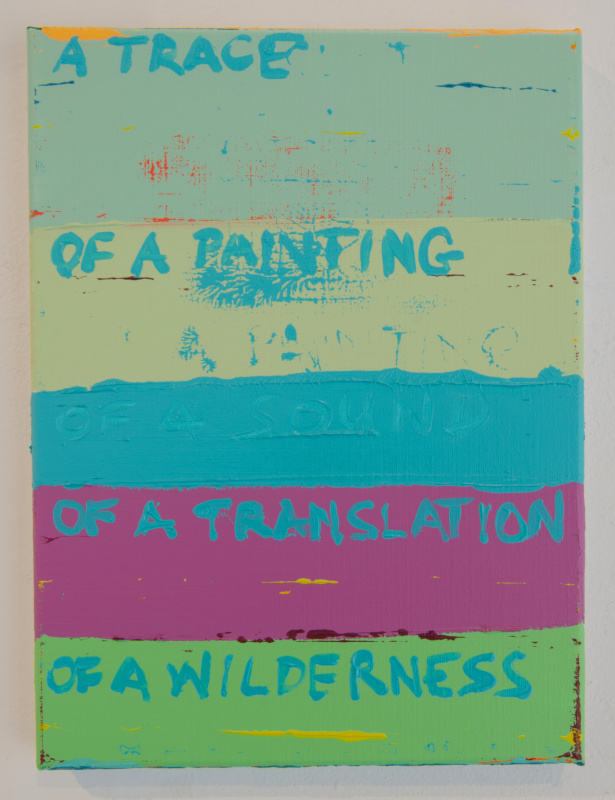