Conversation with Contagion: Introduction to an Interview with Camilla Hannan on Contagion.

Norie Neumark is Emeritus Professor at La Trobe University, honorary professorial fellow Victorian College of the Arts (VCA) and a sound/media artist based in Melbourne.

I'd like to offer a brief introduction to my interview with Camilla Hannan by way of inviting you to listen, but without pre-empting the interview itself. I hope this will situate my own response to Hannan's work, which led me to this conversation. And that it will suggest why we chose to present the interview as a sound file rather than a transcription. 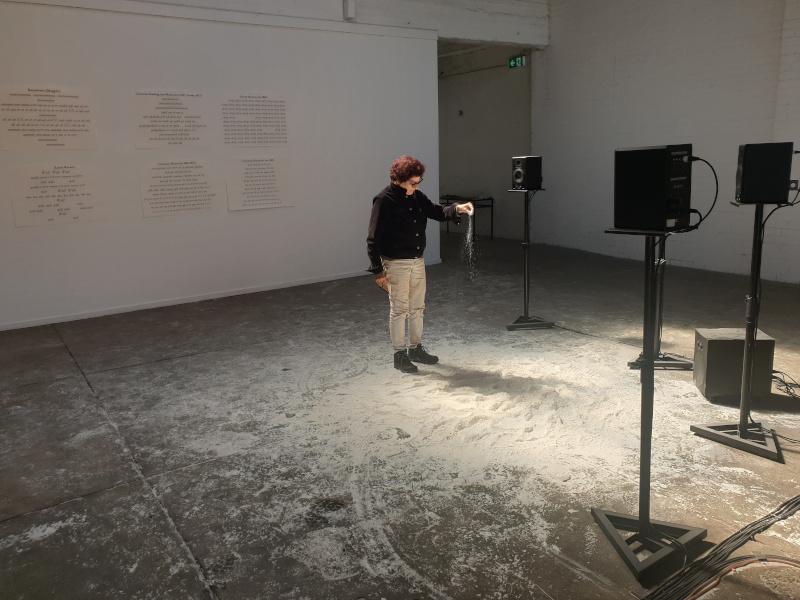 It was a wet sloshy day when I walked inside the Yarra City Gallery in Collingwood to encounter the exhibition Translating Ambiance. The pelting rain clattered on the roof---adding to the intensities of the sounds in the space -- an insistent experience of outside-inside ambiance. Soon after I arrived, the outside came inside as curator Jordan Lacey rattled open the side roller door with a noisy chain, adding to the cacophony, chiming with the scraping metal in Camilla Hannan's work, Contagion. My squelching feet echoed the sodden footsteps in Contagion drawing me into this powerful work. 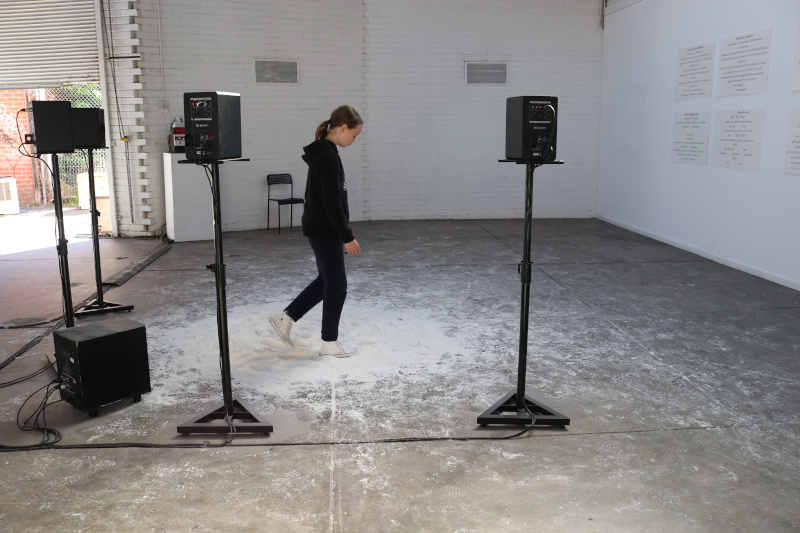 I was focused that first day on Hannan's work, in anticipation of a conversation with her for this publication, but of course her work and my experience of it did not take place in isolation. In the mostly open and cavernous spaces of the Gallery, Contagion's sounds spread with eponymous force into other works, other spaces---tincturing the atmosphere and tinctured by it. Hannan's work was thoughtfully placed directly next to Catherine Clover's and their screeching birds---Clover's silent, Hannan's noisy---parroted each other. I read Clover's text listening to Hannan's work and Clover's words echoed in my mind's ears, my ears' mind, as I turned back to focus on Contagion. I took the force of both with me, still reverberating, along with Contagion's flour on my shoes, as I encountered the other works in the exhibition. I now attuned to shrieking in some other works, for instance, in an intensified way. And the sense of the flour in the air, within and beyond Hannan's own work, made the materiality of the air---and the sounds it carries--- all the more palpable. The flour was a constant reminder and evocation, not just in the air but also on the ground, of the historical (and current) memories held by matter and the materiality of the ground, the air, the sound. Contagions of memories. When I finally left the Gallery, bringing with me the flour on my shoes, and the sounds resounding in my ears, I would listen anew to the screeching voices of the crows and warbles of magpies in Yálla-birr-ang, on this sovereign Wurundjeri Woi Wurrung land. And now, as I write in the context of the Black Lives Matter protests, internationally and here in Naarm /Melbourne, Contagion's deeply felt reminders of white privilege reverberate all the louder. 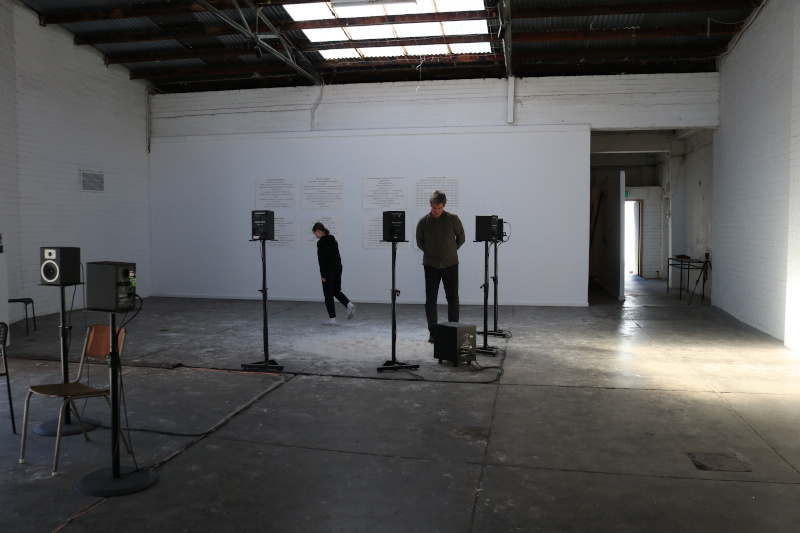 I came to Camilla Hannan's Contagion in the Translating Ambiance exhibition not only as a fellow artist and audience, but also as someone who had been thinking a lot about voice and sonic atmospheres.1 The concept of atmosphere had particularly provoked my interest when I was researching voice in Aarhus, Denmark, when I alerted2 that the Danish words (similarly to the German) for voice and atmosphere were the same---stemme---and that voice also describes the atmosphere in a room, for example, as the room's stemning (voicing). I was entranced. This spoke to my own embodied sense of human and more than human sonic environments forcefully voicing themselves, calling out in atmospheric, performative and aesthetically and ethically entangled ways---which political philosopher Jane Bennett had particularly alerted me to (Bennett 2010). My thinking about atmospheres benefited, too, from Gernot Böhme's writing about atmosphere, with his focus on perception, which happens sensuously through bodily presence, including that of people, objects and physical (including sonic) environments (Böhme 1993, 2013, 2017). 3 Like Böhme, cultural geographer Ben Anderson thinks through phenomenology about the affective qualities that may emanate from bodies but also exceeds them (Anderson 2009, 80). Through materialism Anderson focuses on the spatiality of atmospheres---surrounding and enveloping but also turbulent, indeterminant, ambiguous. For Anderson and his collaborator James Ash affective atmospheres bring affect into play with relationality in an entangled way; and, as they do, they "exert[] some kind of force..." (Anderson and Ash 2015, 42-43, 35).

This force, sonic, material, sensuous---human and more-than-human---reminded me of the vital insights of anthropologist and writer Kathleen Stewart:

An atmosphere is not an inert context but a force field in which people find themselves. It is not an effect of other forces but a lived affect -- a capacity to affect and to be affected that pushes a present into a composition, an expressivity, the sense of potentiality and event. It is an attunement of the senses, of labors, and imaginaries to potential ways of living in or living through things.... Attending to atmospheric attunements and trying to figure their significance incites forms of writing and critique that detour into descriptive eddies and attach to trajectories. This is writing and theorizing that tries to stick with something becoming atmospheric, to itself resonate or tweak the force of material-sensory somethings forming up. (Stewart 2011, 452)

Atmospheres--- as Stewart senses them, lives them, writes them---are simultaneously both poetically affective and commonplace. Commonplace...common place. Acutely attuned to their compositions of place, her writing listens to the voices of these precarious and complex atmospheres---every day and ubiquitous---bringing them from background to the foreground (Stewart 2012, 519). 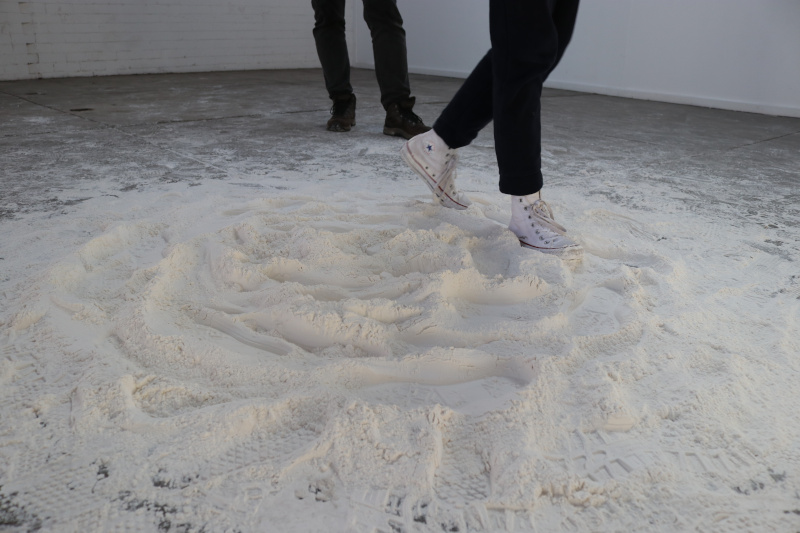 Stewart's insightful and inciteful attentiveness to art's ability to bring voices of the background to the foreground chimed with what I'd been reading of essayist and artist Seth Kim-Cohen's critique of ambient sound art and its failures to do art's political and cultural work of foregrounding. I mention this briefly because the ambiance that Hannan (and the exhibition itself) works with is very different from what Hannan calls 'wallpaper' ambience. One of the problems with ambient sound art, for Kim-Cohen, is that it elides material and situational power relations of history and culture. It ignores the with-ness, the relationality that is crucial to life and to art---and, I would add, to atmosphere (Kim-Cohen 2016).

This with-ness resonated for me with what has been the particularly inspiring thinking---thinking with animals---of philosopher Vinciane Despret. Despret understands the possibilities of human/nonhuman animal relations as a mutual attunement---a passionate, bodily with-ness. This attunement depends, she says, on the availability of bodies to each other, to practices that transform both, to affects that move them (Despret 2004, 2016). As just such a transformative practice, I would suggest, art can be a way into "learn[ing] to encounter animals as if they were strangers," living in an "associated world." What Despret talks about as affective attuning to this associated world---to an "association of associated worlds" (Despret 2016, 162,165-166) ---reverberates for me with Stewart's composition of affective atmospheric attunements. And the forceful, artful possibilities, which both Despret and Stewart evoke, came vividly to life for me as the voices of screeching cockatoos called (should I say insisted?) me into Camilla Hannan's work. 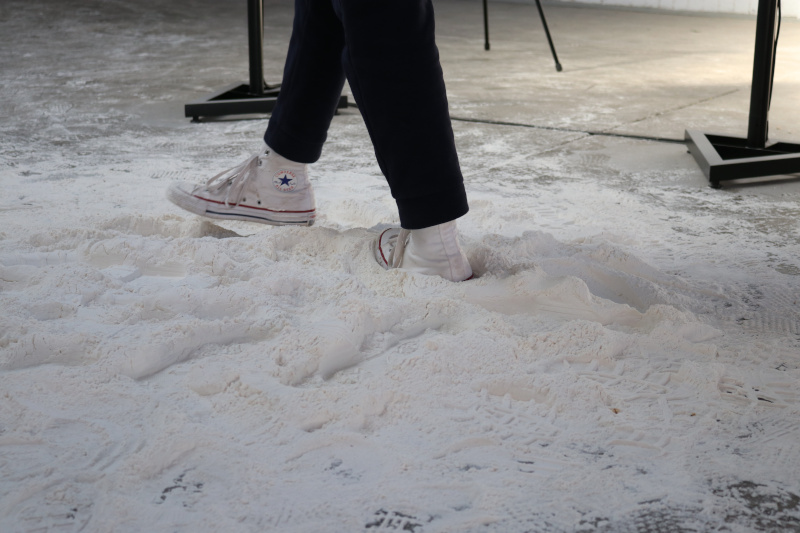 These were the sorts of things I was thinking about as I walked through the white flour in the center of Hannan's de-centering work. I will leave you now to hear what Hannan herself has to say on such things, the making of the work, and so much more. But if you are wondering why we offer you a sound file of our conversation, which took place standing at the edge of the white flour, rather than a transcription from which you could easily extract ideas such as these, let me finally offer this. We sensed that a transcription would flatten intensities and insistences of voices---not just ours but the work and the atmosphere of the place---which shaped the conversation. The sound of Hannan's work, playing as we talked, attuned us to the vibe4 of the place which had situated and attuned my initial response to Contagion and did so once more, more deeply now, in conversation. And so, Camilla and I invite you to listen to our conversation as a sound file, where the atmosphere of the space with the insistent sounds of the work (infiltrated by the nearby neighborhood sounds) can also speak to and with us as we speak to and with Contagion. Our conversation was as much with them, in relation to them, as to each other.

Böhme, Gernot. 2013. "The Art of the Stage Set as a Paradigm for an Aesthetics of Atmospheres." Ambiances. http://ambiances.revues.org/315. Accessed February 2014.

Despret, Vinciane. 2016. What Would Animals Say if We Asked the Right Questions?)

Kim-Cohen, Seth. 2016. Against Ambience and other essays. London and New York: Bloomsbury.