Johnny Lovett has a music career spanning 56 years, performing across the greater parts of Australia. He has 11 country music albums to his credit.

Russell Bryant is an Anangu resident of Yalata. He is a musician in the Yalata Anangu rock band, a Lutheran pastor, and a member of the Maralinga Tjarutja Council.

Keith Peters is a musician and songwriter, and key spokesperson for the Yalata community. He has represented the Maralinga communities in handover ceremonies returning control of Maralinga Lands to Anangu.

Mima Smart OAM is a, painter, singer and community leader at Yalata. She has served as the Chair of the Yalata Community Board, and is a leading advocate for her community’s development and well-being. 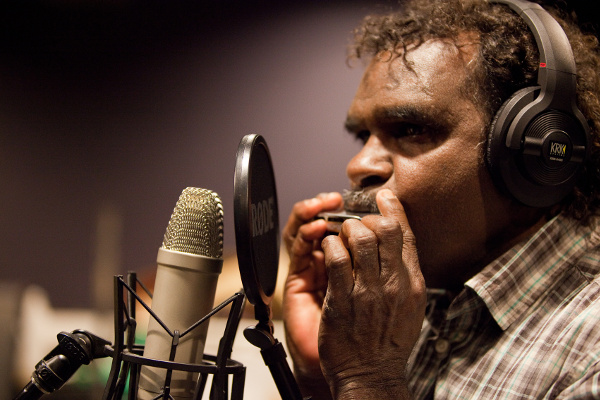 'Maralinga' has been produced by Aboriginal singer/songwriter Johnny Lovett with musicians and singers from Yalata, a remote Aṉangu community 1,000 km west of Adelaide.

The collaboration also included Umeewarra Radio Station that provided the recording studio in Port Augusta, and arts production company Alphaville, which has been working on projects with Yalata community.

Yalata Band has been making contemporary music around the remote communities for several years. In Aṉangu country, there's no shortage of energy, commitment to the songs, and a sense of humour. But Maralinga is also a place where British tested nuclear weapons in the 1950s and 60s. This song is part of that sad history. It recalls the scene of devastation caused by the atomic bombs, and the subsequent impacts on Aṉangu communities.

Maralinga has been translated into Pitjantjatjara by the Yalata choir, and the choir and musicians got together in April 2016 in Port Augusta for the recording session. "Retelling stories of the families who moved to Yalata after the bombs is important for our community's survival", Choir member Mima Smart.

The Lyrics: Pitjantjatjara and English

Maralinga is a desert place of red and arid sands

Where people, from the Dreamtime, had wandered on their land.

Now the years have come and gone. The world begins to hear

Of devastation to a race that loves the earth so dear.

And when the dust had cleared away there came the stench of death.

And the government gives the orders to keep the area clear.

Talk of radiation would only cause great fear.

The blast has killed the natural food and poisoned all the grass.

The presentation of this land is just a government farce.

The land is not a fitting place for any living man.

Will never echo to the sound where tribal people range.

But the government gives the orders to keep the area clear.

Talk of radiation would only cause great fear. 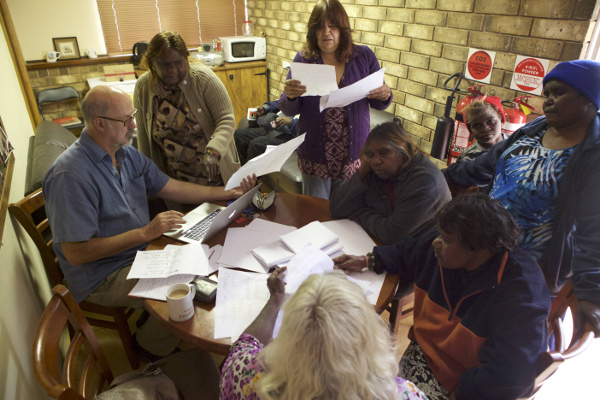 The Sing Maralinga project started when Johnny Lovett, a visiting Gunditjmara songwriter and musician played at the Yalata Festival in 2015, alongside the Yalata Band and other visiting bands.

Yalata and the related township of Oak Valley are Anangu communities in the far west of South Australia. The families were resettled from Maralinga Tjarutja lands at the time of the British nuclear tests in the 1950s. The community is primarily Pitjantjatjara Anangu who descended from the desert people in the north and north-west of South Australia. Pitjantjatjara is the first language of the Anangu and English is the second language. In 2015 Yalata celebrated its 60-year anniversary as a settlement and its 40-year anniversary as a township under Anangu control and management. As part of these commemorations, Yalata initiated an annual festival, and the first took place in June 2015. This included music, visual arts and film. 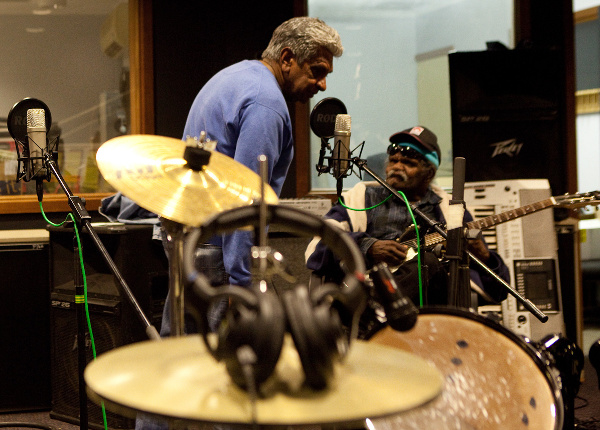 At the festival there was a meeting held between Johnny Lovett and Yalata elder Keith Peters, to discuss new music projects that would involve the Yalata Band. Forty years earlier, Johnny had written a song Maralinga and wanted to provide that song to the community, and translate it into Pitjantjatjara. Johnny had also consulted with Yami Lester about the song, because the recording of Maralinga has significance in both MT and APY lands. As the collaboration evolved, it also included Umeewarra Radio Station in Port Augusta, Country Arts SA as the key funding partners, and arts production company Alphaville, which had been working on projects with Yalata community via the Nuclear Futures Partnership Initiative. 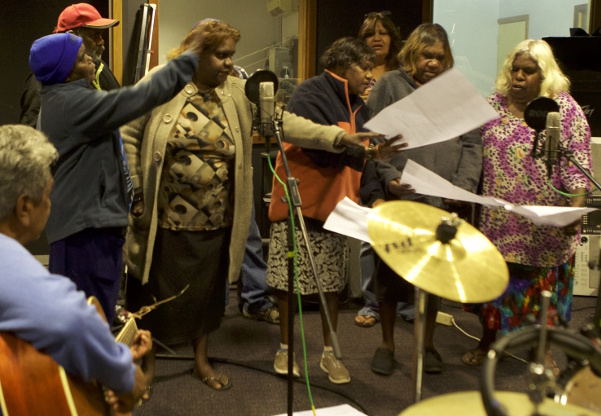 In the same week, a series of paintings were produced at Yalata, in a project related to the music project and involving members of the choir. The paintings echo the story told in the Maralinga song, and two of the paintings became artwork for the CD. Mima Smart and Rita Bryant also produced a large banner that has been used as the backdrop to performances. 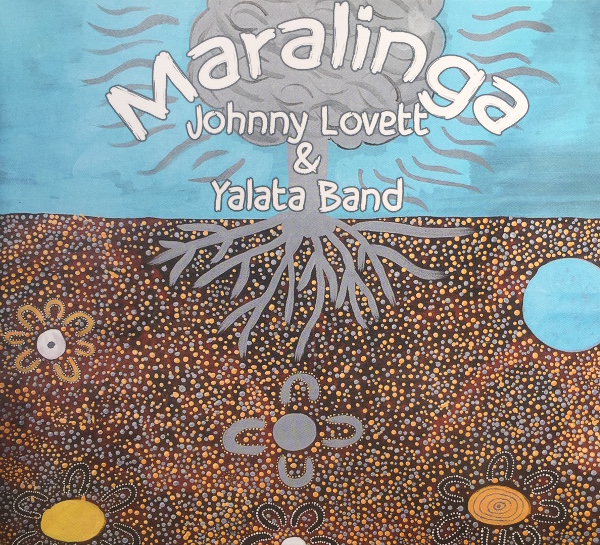 As a spin-off element for the project, a crowdfunding campaign was used to purchase new instruments for the Yalata Band, to assist with ongoing music development at Yalata, especially youth music workshops.

Sound mixing of commenced at University of Adelaide in the studios of the Centre for Aboriginal Studies in Music, with those facilities provided in kind. In July 2016, the CD was produced, with a cover design by graphic designer Kitty Blackman, and art work by Mima Smart, Rita Bryant and Mary Ann Finlay. The finished product arrived just in time for a performance at Oak Valley on 9 August. For this Oak Valley performance, Yalata Band and Johnny Lovett supported Troy Cassar-Daley, and performed the Maralinga song for community members from Oak Valley, Yalata and Tjuntjuntjara.

In October 2016, Yalata Band and Johnny Lovett were invited to run a music workshop titled Sing Maralinga for the Spirit Festival, at Tandanya National Aboriginal Cultural Institute in Adelaide. The workshop featured storytelling around the themes of the Maralinga song, and a concert in which a set of original songs by Yalata Band members were included. On the same weekend (15-16 October), the band and Johnny Lovett performed the song at a public assembly on the steps of SA Parliament House, protesting against proposals for nuclear waste repositories in SA. 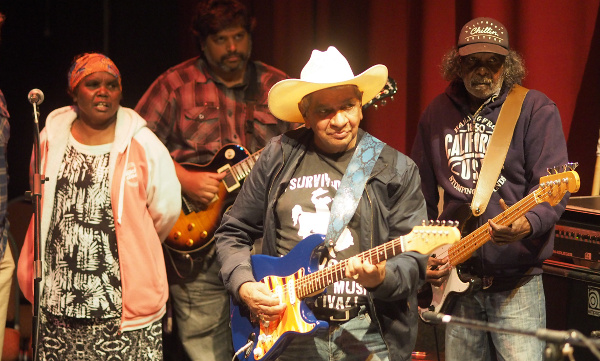 This project provided a catalyst for further music development at Yalata. The song Maralinga gained a new life, and become one way to keep alive the story of atomic testing and its community impacts. Doing this has long-term benefit, through awareness raising of younger generations. This applies to young people in the Maralinga communities but also more widely to the Australian population - most remain unaware of the history of bomb impacts and migration that followed from British nuclear testing and the closure of the Ooldea Mission.

CASM Studio, Elder Conservatorium of Music at The University of Adelaide.

This project has been supported by the Regional Arts Fund and Country Arts SA.

Cover image from a painting by Mary Ann Finlay, photographed by Pam Diment.