Romancing the Atom: a Nuclear Opera in the Park

by JOHN ROMERIL and AVON HUDSON

John Romeril is a leading Australian playwright and film scriptwriter, who has been Playwright-in-Residence for many communities, theatre companies and tertiary institutions.

Avon Hudson is an Australian nuclear veteran, community archivist, and writer and he was a key leader within the Australian Nuclear Veterans Association. He co-authored the book Beyond Belief.

Romancing the Atom: a Nuclear Opera in the Park 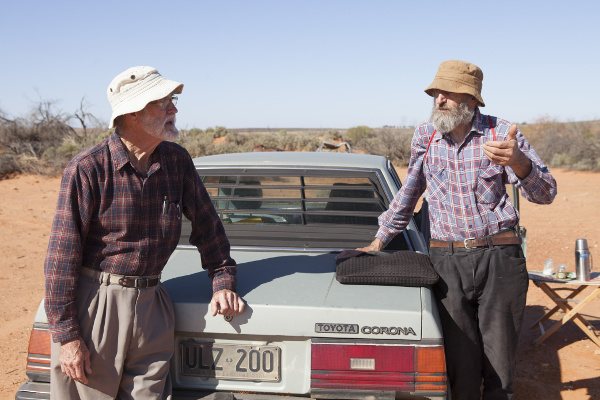 1) 'Tea break on the road to Woomera'. Romancing the Atom in development. Avon Hudson (Left) and John Romeril. Photograph by Jessie Boylan.

John Romeril is a leading Australian playwright (plays include The Floating World, Carboni, The Kelly Dance, Miss Tanaka and Jack Charles versus the Crown). John has been Playwright-in-Residence for many communities, theatre companies and tertiary institutions. In 2003 he won the inaugural ANPC Award for Australian playwrights; and in 2012 the Green Room Lifetime Achievement Award. In 2014-15 he was playwright in residence at Balaklava in South Australia, a project within the Nuclear Futures Partnership Initiative.

An atomic drama... it's not virgin territory. Perhaps Dr Strangelove captured it best. But around 1974 I wrote "The Radioactive Horror Show". That's my 'prior form' for the current project. Then came the Royal Commission into British nuclear testing, and the new revelations about what went on at Maralinga; plus the stories of genetically modified offspring, the first hand testimony of parents coping with their deformed children, the ongoing threat that ushers in the age of 'children foregone' -- birth control to avoid further damage to the gene pool... It's hard to look at the victims without a visceral response, to the horror of the bodies at a medical level. yet those who died were the lucky ones. Thousands of millions of us have survived the bomb, only by not being in range of it. Those close at hand endure monstrous consequences. But we're all atomic survivors... This is a 'genie-out-of-the-bottle' topic. For eons we've been born, lived, and died... but now the way we live is hair-trigger stuff. The thing about nuclear weaponry, it's part of a war game. A stockpile, aircraft that can be scrambled, a button, a button in the wrong hands and the scale of operation and magnitude of potential damage is catastrophic... There hasn't been a generation over which the shadow of war has not fallen. War is an immense topic. You either write about it or you ignore it as too distasteful." (John Romeril interviewed by Paul Brown.) 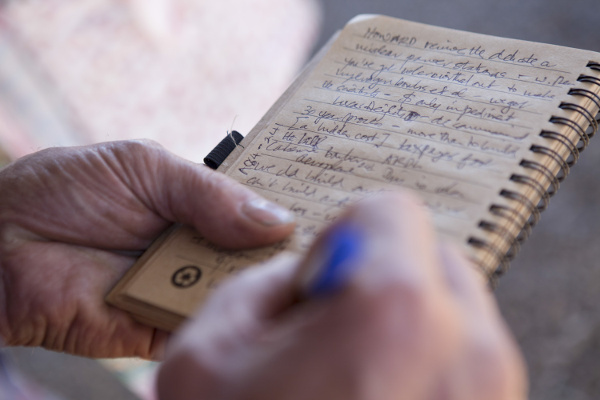 Taken by the wind: Avon Hudson

Avon is a nuclear veteran who worked on the 'Minor Trials' at Maralinga. A community archivist and writer, he was a key leader within the Australian Nuclear Veterans Association. Avon is also a wood turner and a collector and designer of clocks; and with Roger Cross he co-authored the book Beyond Belief. He appears as an interviewee in the digital projection 10 Minutes to Midnight and the photographic exhibition Portrait of a Whistleblower -- projects within the Nuclear Futures Partnership Initiative.

[At Maralinga] firing platforms were used to test components of bombs and bombs to see what would happen if the bomb was accidentally involved in an accident such as when they're carting them around and one fell off the back of a truck so as to speak... The scientists were never sure whether a bomb would accidentally explode if it was involved in some sort of accident and these were safety tests... And they contained the source... sometimes a couple kilograms of plutonium in these explosions... and they had high explosives packed around then to explode the component to see whether the bomb would accidentally go off. And they fully expected some of them would go off accidentally, so they used to clear everybody back seven miles and remotely exploded them from there. Well they caused an enormous contamination because it oxidised the Plutonium 239 which is one of the most dangerous substances known to humans, and exploded that into the atmosphere. They went a thousand metres up into the air... and of course all that fell back within kilometres from where it was exploded... up to 90 kilometers away. It was taken by the wind, so you can imagine how much contamination took place... and people have to understand, here, at this point that 2 kilograms of plutonium doesn't sound like a lot but bear in mind that one microscopic speck in your lung or your gut could kill you. It's what you can't see that will be dangerous... so after a dozen of these... and they used about 24 kg of plutonium... now if you work that out it's an enormous amount. It's enough to kill the whole world about a million times over if we could all get a dose. So the reality was that area became one of the most heavily contaminated places on earth, there was nothing quite like it because the plutonium was scattered for up to 90 kilometres away. So. I worked there for a few months... I'm glad I was only there for a short period of time. (Avon Hudson interviewed by Ellise Barkley.) 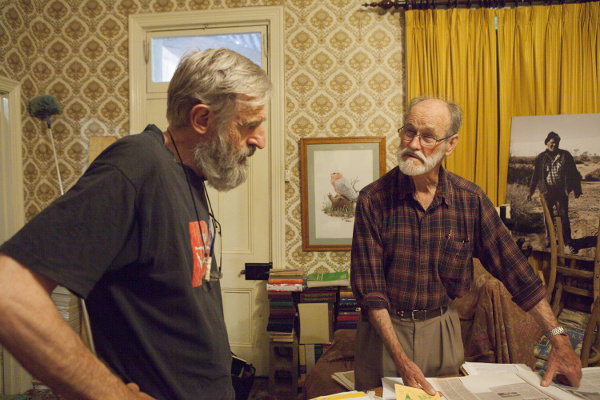 3) 'With the archives' John Romeril (Left) interviews Avon Hudson in his lounge room. Photo of activist Kevin Buzzacott in the background. Photo by Jessie Boylan.

Set at a humble bench in an Adelaide park, Romancing the Atom explores the relationship between 'HE' a loquacious and spritely though elderly veteran of the Maralinga nuclear tests on his way to a medical appointment, and 'SHE' a middle-aged woman coming to terms with her family history and the coming birth of a grandchild. 'Romancing the Atom' uses humour, song and digital sound technology to tell a tender and sad story. It stages the 'nuclear uncanny' -- the sense that major threats of the atomic age haunt every moment of our daily lives. The work originates in a collaboration between famed Australian playwright John Romeril and nuclear veteran Avon Hudson -- a project within the Nuclear Futures Partnership Initiative.

The play has its origins in a community arts project set at Balaklava in rural South Australia, a place subjected to fallout from British nuclear testing at Maralinga. Script research and development began as one element of Alphaville's 'Nuclear Futures' program. To devise the script, playwright John Romeril lived and worked at Balaklava with nuclear veteran Avon Hudson, to 'sample' his extensive archive, plumb his overflowing memory, hear his eloquent reflections on Cold War madness, learn the stories of nuclear veteran families, and construct a script for a dialogue/opera/dance for two actors. Avon's life and the experience of nuclear veteran families are the impulse for the play, though characters are composites. 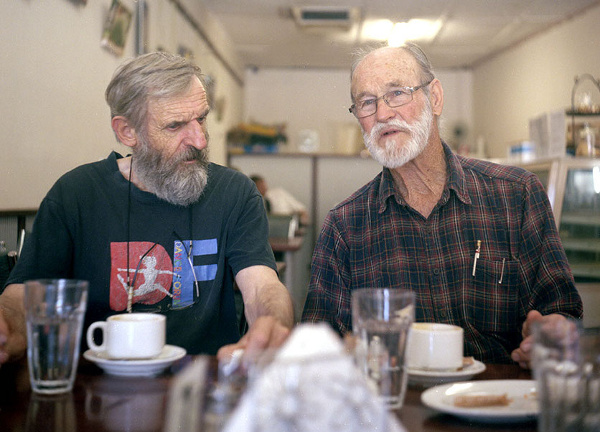 From the script Romancing the Atom by John Romeril:

In simple terms.... A man on a park bench, on the back of which is a humble metal plaque -- an inadequate memorial to Australia's nuclear veterans. 'HE' has arrived early for a medical appointment in a nearby hospital; he has parked in a hard-to-find parking spot. He watches a woman approach, and mistakes her for someone he knows, Almerta. He's prompted even by her appearance to flash back to Almerta delivering her evidence to the Royal Commission into British Nuclear Testing. She reaches the bench and he realizes it's not Almerta. But they do have in common an association via their respective Maralinga stories. She is angry with her deceased father, Drago. She pays out on her father, accusing him of 'crimes'. They share their stories, sitting together on the park bench. She relays her father's immigration story, then how it was he worked at Maralinga. Now HE is running late for his appointment. They have a falling out. SHE loses patience with him, since he's alive whereas her father is dead. He tells his story of blowing the whistle -- exposing Britain's Maralinga experiments. He asks what she wants of him... does she want him to cry for her? She reveals her fears about genetic modification. They express the horrors of Maralinga. She asks him to take her there -- he agrees and they make a pact. They imagine what it will be like to go there. They dream the ideal revenge, imagining ways of paying out on those who committed Australia to nuclear testing. They dance. He leaves for his appointment, though they agree to meet again. She calls after him that she expects him to keep his promise to visit Maralinga. She is left alone. The baton has been passed to the next generation. What her mother went through during her father's illness is now visited on her, as she considers her daughter's latest pregnancy. (Fourth Draft play script 2016)

5) Park Bench in the Adelaide Peace Park -- the imagined setting for Romancing the Atom. On the back of the bench, and on the ground in front are modest plaques commemorating traditional owners, service personnel and civilians affected by British nuclear testing. Photo by Tania Safi.

In its content, Romancing the Atom conjures the atomic age, with stories and voices otherwise suppressed through official denials of important Australian history. It stems from a nuclear veteran's archive, and a playwright's commitment to 'going to life' as a rich and bountiful source. It taps an exhaustive documentary record. Yet in Alphaville's work with atomic survivors, 'Romancing the Atom' represents only one thread -- the nuclear veterans story, while several other major projects in the Nuclear Futures program have been developed with Aboriginal communities (notably digital projections, sculpture and paintings projects). John Romeril's play, and Avon Hudson's life that inspired it, can sit alongside those other pieces in the puzzle, contributing to diversity of form and practice. In its creative process, the project passes from its origins in community cultural development, through experimentation in its staging, to a honed work for the repertoire of Australian plays -- to be presented in its community of origin, taken up by major companies, toured internationally, perhaps toured to schools.

I've called it an 'opera', in terms of marshalling sound, so it impacts aurally and visually in a manner that equates to 'death falling from the heavens'. The stage becomes 'the theatre of war'. Yet the destructive capacity needs delivering on stage by stealth, via a soundtrack that evolves beside the dialogue. The scale of the weaponry is relevant, creates a new soundscape. (John Romeril interviewed by Paul Brown.)

Towards production, on the workshop floor, the inventiveness starts with a psychological exploration of character via the text, with live sounds that enter the spaces between everyday conversations. The interplay between text and sound-mixed-live, not always evident in the written script, is where the originality and the power of the performance lies. The play's live sound mix will express the impact that a nuclear explosion has throughout generations of time. Cast and crew have imagined a space populated by hidden microphones and other digital sound devices, so that the story reverberates with sounds ranging from the intimate exhale of a man breathing to a cacophonous maelstrom as walls, floors and everything in between respond to the touch of the performers.

6) Script workshop at The Block, Brisbane, August 2015. QUT drama students, Actors Errol O'Neil and Monette Lee, and Playwright John Romeril. The workshop took place in the exhibition space, with images from the companion project Portrait of a Whistleblower as backdrop. Photo by Danielle Marwick.

The first public presentation of Romancing the Atom was a workshop version at The Block, Queensland University of Technology, 5-6 August 2015: Director: Gordon Murray; Actors: Errol O'Neil and Monette Lee.

Copyright for the play script resides with John Romeril and Alphaville.