Mima Smart OAM is a, painter, singer and community leader at Yalata. She has served as the Chair of the Yalata Community Board, and is a leading advocate for her community’s development and well-being. 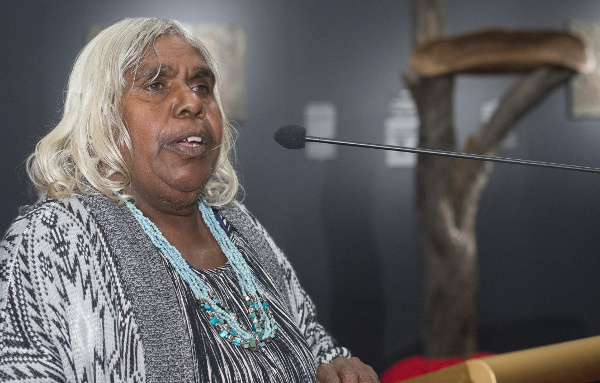 I am looking back to what has happened to our beautiful land of Maralinga, a land that was exterminated by the atom bomb.

Before the bombs, our families were still in the desert and were travelling south to a place which was Ooldea Mission.

In Ooldea, a missionary was looking after our families there. They were all happy. Kids were put in homes... a girls' home and a boys' home. People were happy.

They were given their new names plus their native name, by the lady named Daisy Bates. They lived there for a long time.

After many years, the British Army sent men to Ooldea Mission, to have a meeting about what was going to happen in a few months or weeks time.

After that the white missionary had a meeting with the other white people who were living there, before they passed the message to the Anangu people.

Then next day that missionary brought everybody together, sat in a circle, and told them about what is going to happen.

When the message was given to all the people, they felt angry. They all got upset. Some were hitting their heads with sticks and stones. Others were putting sand all over their bodies. They were all crying sadly, saying, "Where are we going? We are going to a place we have never been to."

The Ooldea Mission was closing up and everybody was given rations of food to take with them for their children.

They were putting tracks on the sand so that others could follow them. When they didn't come we thought "maybe they have gone hunting". They went on different tracks. Maybe the wind blew the footprints away. Some were lost.

Our people were divided into four groups. Some went south to Yalata. Some went to Western Australia, others to Northern Territory, and across east South Australia.

It was a really really sad day for our families to leave Ooldea. They enjoyed living there. But that was gone. Our families were lost and didn't know what place they were going to. Just like they were the people who were taken out to the desert by Moses, as it says in the Bible.

Because of the poison from the bombs being tested at Maralinga. No good at all. That poison has killed so many of our people. Through that atomic bomb. And radiation on everything.... sand, trees, animals, buildings and other things.

Our families are really upset by all this mess. And I am glad you are all here to hear our stories truly told. It is important that these stories are told for our next generation.