N.A.J. Taylor teaches across the broad interdisciplinary field of the Environmental Humanities at the University of Melbourne.

Paul Brown is Producer for Alphaville, a Sydney-based arts company specializing in creative projects that have environmental, scientific and social themes; and he holds an honorary position in Environment and Society at University of New South Wales.

We acknowledge and pay our respects to the elders past, present and future from the Maralinga communities that have hosted and supported the Nuclear Futures Partnership Initiative. The visiting artists in this initiative have been privileged to work with Yalata and Oak Valley artists, community leaders and participants who led and contributed to many of the arts projects described in this special issue. We also acknowledge the support and contributions from the communities of nuclear veterans and their families who have participated in the program; and we also pay our respects to the other international atomic survivors who have also participated. Individual contributions are acknowledged throughout the special issue. 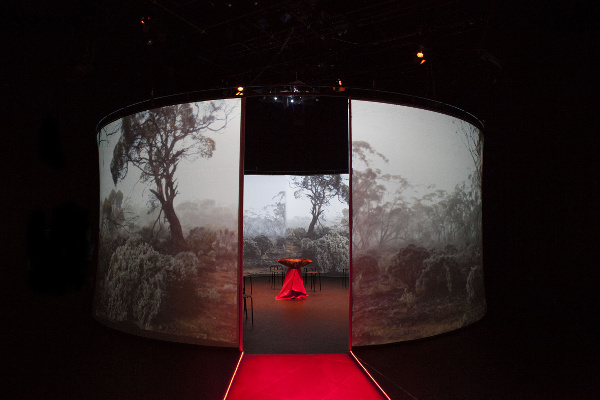 It is little known that among the survivors of the nuclear attacks on Japan were a small number of Australians.1 It is also barely understood that Australia yielded its land and compromised the future of its people to allow British nuclear imperialism--in the form of nuclear weapons testing at the Monte Bello Islands, Emu Field, and Maralinga.2 The effects of those tests were unevenly distributed across the indigenous peoples, who never ceded their sovereignty, the service personnel and civilians performing the tests, and the general population of the continent. During and after the Cold War, greater sections of Australian society have been implicated in Australia's nuclear future--which is manifest in the legacies of uranium mining, nuclear testing and nuclear wastes, and signified in new public debates about the nuclear energy option, the role of extended nuclear deterrence in Australia's defence, the expansion of uranium exports, and ongoing proposals for managing both locally-produced and imported radioactive wastes.

Since the time of the British nuclear tests, in the 1950s and 60s, Australian artists have responded to Australia's nuclear politics and history through film, song, digital arts, paintings, sculptures, theatre, photography, poetry, literature, and many other media (see James 1990; Mittmann 2016; Taylor 2018). In this special issue, we argue that Australian artists--and those producing work in, on, of and for the Australian context--offer unique insights about its peoples and land. In doing so, the Australian nuclear experience is reimagined, based on a bricolage of community 'voices' from Australian indigenous peoples, nuclear veterans, and global atomic survivors, artists and scholars.

This special issue is intended to both document the Nuclear Futures Partnership Initiative (NFPI), a multi-year community arts project that seeded a nationally significant suite of Australian atomic artwork (sponsored by the Australia Council for the Arts and others), as well as to make known several new insights and understandings about Australia's experience of the nuclear age that resulted from it.3 As is outlined in detail in Paul Brown's contribution to this volume, the NFPI was an international collaboration designed to bear witness to the atomic age through the creative arts in Australia, Britain, Japan, Kazakhstan, and the Marshall Islands. Across twenty-two projects, participants explored how multiple, dynamic and diverse arts practices drive creative reflection on the atomic age and its consequences for the deep future. Underpinning the work is a range of community arts and cultural development approaches, involving collaborations between communities, their artists, and visiting arts workers.

This collection of 'voices', artworks, papers and other documentation arises from a community of practice formed during the Nuclear Futures arts program involving creative practitioners, researchers, and atomic survivor community members, dedicated to producing reflection, original analysis and practice-led research on the role of the creative arts in dealing with Australia's nuclear history, as well as bringing about alternative nuclear futures. In the papers each author/artist explores the processes, outcomes and implications of their individual projects. One of the themes explored through the papers is the roles of memory and narrative in the creative process, and the positioning of the arts, especially community arts, within wider programs of community recognition and development.

Alongside the papers is documentation of artworks across the diverse range of mediums, showcasing the multi-platform creative work arising from the Nuclear Futures program and beyond. The works sit at the creative junction between historical fact, eye-witness testimony, contemporary nuclear politics and artistic interpretation, and include moving image, visual arts, photomedia, radio plays and podcast, sculpture, ceramics, writing, music, augmented reality, and archival documentation. Many arise from community arts and cultural development processes, inspired by and involving atomic survivor communities, including Pitjantjatjara Anangu in Yalata and Oak Valley (South Australia), who were relocated from traditional lands at the time of the Maralinga tests; Japanese Hibakusha (atomic survivors); and nuclear veteran and descendant networks in Australia and Britain. Positioned alongside campaigns calling for the abolition of nuclear weapons, and local debate in Australia on nuclear industry including waste repositories, the curated works remain relevant and illuminating.

Embedded artworks include: adaptations from 10 Minutes to Midnight and Ngurini (Searching), originally screened for immersive projection; Tree of Life: Gift of Peace, a short film documenting Australia's first sculpture gift to Nagasaki Peace Park; Life Lifted into the Sky, a painting series by Anangu women from Yalata and Oak Valley; Ebay makes the bomb, pottery and ink drawings; and Portrait of a Whistleblower, a campaigner's story represented by photomedia and archival artefacts. Each artwork is accompanied by either an analytical essay or shorter descriptive documentation that conveys a brief project history and artists' perspective.

We have structured the special issue in a way that references three communities that have participated in the art-making, the organisation and the analysis of the Nuclear Futures project and related atomic art. These are the indigenous communities at Maralinga, the network of nuclear veterans and their descendants in Australia, and the global community of atomic survivors.

Following this Editorial, the first part of this special issue begins with community perspectives from the Maralinga communities at Oak Valley and Yalata and reflections by artists working alongside these communities. First, a collection of filmed interviews arising from collaborative arts on country is presented, profiling Maralinga community leaders. Second, Nuclear Futures Creative Producer Paul Brown who led the Australia Council-funded Nuclear Futures Partnership Initiative argues the role of community-based arts in making new knowledge relevant to public policy and decision making. Also explored is the role of community-led art leading to protest and disruption of 'official' histories, and a possible means for communicating messages into the deep nuclear future. Third, Jessie Boylan reflects on the making of art with community in 'Residual: Art Beyond the Event of Maralinga' examining 'home' and 'place' as essential sites of memory and explores the role of documentary artworks including the immersive projection Ngurini (Searching) in transforming real life events within audience experience. Fourth, from South Australia, the work of Anangu participants Russel Bryant and Steve Harrison with visiting artist John Turpie toward an international peace-building and cultural exchange is documented in Tree of Life: Gift of Peace, including a short film documenting Australia's first sculpture gift to Nagasaki Peace Park. Fifth, Linda Dement brings us back to matters of memory and narrative, and the responsibility of creative artists to render hidden aspects of Australia's nuclear history 'visible'. Documentation of artwork includes profile of Yalata's Warren (Ebay) Paul's sculptures and line drawings, extracts from well-known South Australian author Christobel Mattingley from her work with one Yalata family, the compelling painting series by Yalata's Women's Centre Life lifted into the sky, and lastly documentation of Johnny Lovett and Yalata Band's Sing Maralinga project.

The second part of the special issue captures the community perspectives from the Australian and British nuclear veteran network and analysis from practitioners and researchers working alongside these participants. This cluster opens with the voices of nuclear veterans and descendants presented in filmed interviews. Nuclear Futures Program Manager and Evaluator, Ellise Barkley then explores the implications of the atomic artwork generated using a futures lens, and asks what creative artworks and artefacts can endure across the deep-time of the nuclear future, and by what processes--if at all--is this achieved? Barkley also offers the R.E.A.D. model (Reflection, Evaluation, Analysis and Documentation), as a co-designed tool for understanding the intermediate outcomes and impact of creative arts and partnerships. In their multimedia essay, 'Staging the bomb', Ellise Barkley, Nic Mollison, Paul Brown, Luke Harrald and Teresa Crea explore the impulses, challenges, and technical limitations of immersive digital projections that seek to represent the atomic age; and they report audience responses to showcases featuring the first of these projections 10 Minutes to Midnight. Director Teresa Crea then takes further steps to explain the basis of audience response to immersive projections in her own contribution to this volume. Jessie Boylan contributes insight into art as protest and the role of art in the search for atomic survivor recognition in her analysis of her long running photographic collaboration with nuclear veteran Avon Hudson in her exhibition Portrait of a Whistleblower. Meanwhile, Gordon Murray deals initially with the very practical issue of where the sound and image of the bomb fits within artworks but gives focus to the 'nuclear uncanny' as a description of contemporary human existence. To close the discussion of nuclear veterans, Paul Brown interviews Australian playwright John Romeril, in which they review and analyse Australian theatre's attempt express the richness of everyday life lived in the shadow of war.

In the third--and final--part to this special issue, we include reflections from select project partners based internationally that serve to situate Australia in its global context. Nuclear knowledge is, as we have learned from the various Nuclear Future Partnership Initiative participants already, highly situated. For this, we hear from atomic survivor communities overseas, including Japanese hibakusha in an opening multimedia collation. Following this, N.A.J. Taylor connects the Australian perspective with those held both regionally and internationally. In so doing, he argues that Antipodean nuclear art is discernibly different from that which is made in the Northern hemisphere. This is because, Taylor claims, people from the Antipodes--by which he refers to Australia as well as Melanesia, Micronesia, and Polynesia--offer a unique perspective on the relationship between human and non-human beings, and the earth they inhabit. Mick Broderick and Robert Jacobs connect the Australian experience with nuclear post-colonialism and its international legacy through their documentation of the Global Hibakusha Project. Meanwhile, Merilyn Fairskye's personal account of visiting the world's atomic sites explores how the 'slow violence' emerging from those sites becomes a trigger for allowing the nuclear world to be 'felt' by audiences; and radio hosts Adrian Glamorgan and Elizabeth PO' reflect on their production of Understorey, a community radio on nuclear issues and other environmental themes, produced in Western Australia.

To close the collection, Tilman Ruff--the co-founder of the 2017 Nobel Peace Prize-winning organisation, the International Campaign to Abolish Nuclear Weapons--offers a Postscript that connects the creative arts with developments in international public policy.