Day One. The Beginning of Whatever We Are in Now.

Warren (Ebay) Paul is an Aboriginal artist and sculptor from Yalata in the far west of South Australia. His intricate line drawings depict local scenes, the landscape of Yalata viewed from the air, animals and vegetation, dreams and political viewpoints.

Day One. The Beginning of Whatever We Are in Now. 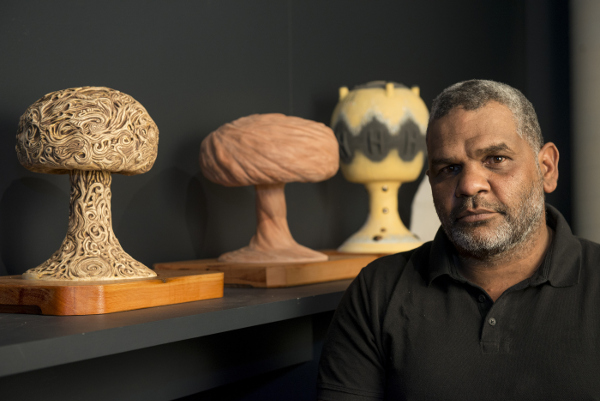 "I wanted to show the bombs blowing up the country, blowing up culture. I wanted to call it, "Day one: the beginning of whatever we are in now". It changed everything. Thinking you can blow up an atomic bomb on someone's country -- it kind of gets in the way. The atomic bomb -- it's only got one use, and that is to kill people, and cause death and destruction. It's a pointless thing."

Warren (Ebay) Paul is an artist from Yalata in the far west of South Australia. He produces intricate ink drawings, depicting local scenes, the landscape of Yalata viewed from the air, animals and vegetation, dreams and political viewpoints. In 2014 he turned his hand to pottery, working with Pam Diment, potter and then Director of Tjutjuna, the Ceduna Aboriginal Arts and Culture Centre, in an exploration of the images and impacts of the atomic bomb. The sculpture mentorship was undertaken as a community arts residency, facilitated by the Nuclear Futures program, where Warren initially focused on making A-bomb-like objects as intermediate art works to inspire his line drawings. The sculpture series emerged as artworks in their own right, and in 2016 were exhibited at Tandanya National Aboriginal Cultural Institute as part of the Nuclear showcase produced by Alphaville in 2016.

2) Ebay Makes the Bomb 4min video. At their Ceduna studio, Warren Paul and Pam Diment reflect on the making of the bomb series. The bomb being created, 'One Tree' represents the first British nuclear test at Maralinga on 27 September 1956.

The ceramic pieces express the horror and futility of the atomic age. The bomb sculptures comment on the first series of four nuclear tests conducted by the British at Maralinga, sixty years ago. The first of these took place on 27 September 1956. The second series of bombs at Maralinga were exploded in 1957. This 'Antler' series saw three bombs exploded. With the three tests at Monte Bello Islands in 1952 and 1956, plus two at Emu Field in 1953, this makes a total of twelve atomic bombs exploded on Australian soil in the 1950s. 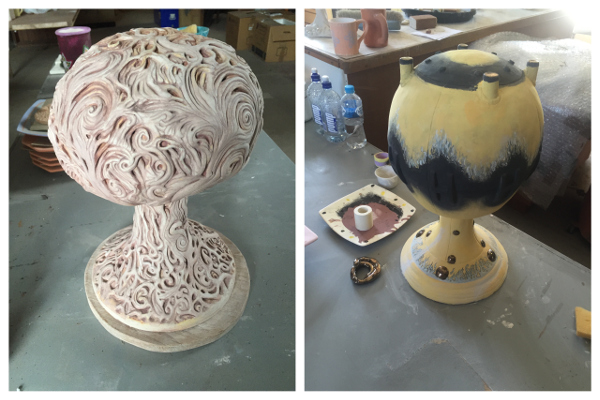 4) and 5) Marcoo and Breakaway bomb sculptures at Ceduna studio

The wave sculpture, "Fukushima: elements of a slow bomb" is dedicated to Mayor Kotaku Wamura who saved his town Fudai by building a sea wall that stood firm against the Tsunami of 11 March 2011. The piece expresses the idea that nuclear power stations and other nuclear facilities constitute slow bombs, with their yield of radiation comparable over time with atomic bombs. 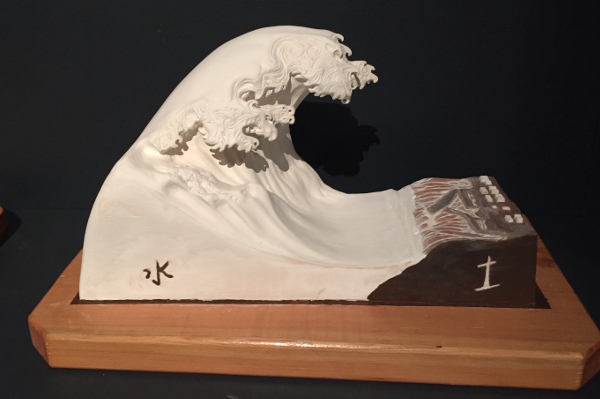 6) Fukushima: elements of a slow bomb

With thanks to: Tjutjuna Ceduna Aboriginal Arts and Culture Centre, Tullawon Health Services Yalata; and to Tandanya National Aboriginal Cultural Institute for use of extracted exhibition captions.

Copyright for the images and artwork resides with the artist and photographers.