Alba Mayol Curci is an artist and writer based in Barcelona.

Within the greater system of conditions governing our ontological status, that is, the way we exist and become at a given point and within a given environment, one of the manifestations of power in its pervasive and tentacular reach is the buying and selling of labour force. Within this specific context, the procedure of resignation can be envisaged as an action potentially able to create meaning. When labour force is sold not to a private company with mercantile activity but to a supranational structure with a strong rhetoric of Enlightenment concepts, namely respect for human dignity and human rights, freedom, democracy, equality and the rule of law, to remove oneself from it may generate a fruitful though bittersweet move. In addition to a critical positioning in front of the Western discourse of progress and wellbeing, there is the perception that the self is put at stake, its very material life conditions for everyday existence. Thus, creative practice arises from a moment in time of suspension and conflict of one's own subjectivity, and it is by means of a research into it, as intertwined with a given political and socio-economic framework, that traces left on the body may be elaborated, and the whole process of embodiment imposed by biopower1 constraints may reveal its potential for subversion.

I began working on the physicality of power as encapsulated in institutional and historical buildings out of the simple question "Where does power reside?", taking this question in its most literal sense. The obvious answer revealed itself not that obvious when a close analysis was applied to certain specific examples. The first of them was one belonging to the context I relate to the most, the Spanish on-going post-Civil War context, the so-called dos Españas [two Spains], a sort of social taboo not to be mentioned too loud. The Castle of San Fernando in Figueres, in the north-east of Spain, close to the French border, is - quoting the website of the consortium in charge of the building - "Europe's largest bastion fortress". As all that is linked to the military after 40 years of dictatorship, the remains of that era act like a zombie reminder of a pretty badly patched piece of cloth, or a pretty poorly tied piece of bandage to stop a haemorrhage, to pick a more evocative simile. Its zombieness lies in the fact of it being a non-ethereal, non-ghostly presence, as it is sheer matter, touchable, smellable, a presence able to convey darkness, both in feelings and in memories. It nevertheless stands there casting a shadow, a silent menace, a translucent proximity, a living-dead device of power operating as a diachronic symbol. In the past, in full operation, it was an actual home of armies and a source of tensions and dissuasion for the population in the area (in its vast majority supporters of the Second Republic, the one dismantled by Franco's coup-d'état). In the present, a more or less ignored body kept half-alive by the descendants of the dictator still in the Military estate, and tolerated by subsequent local governments. 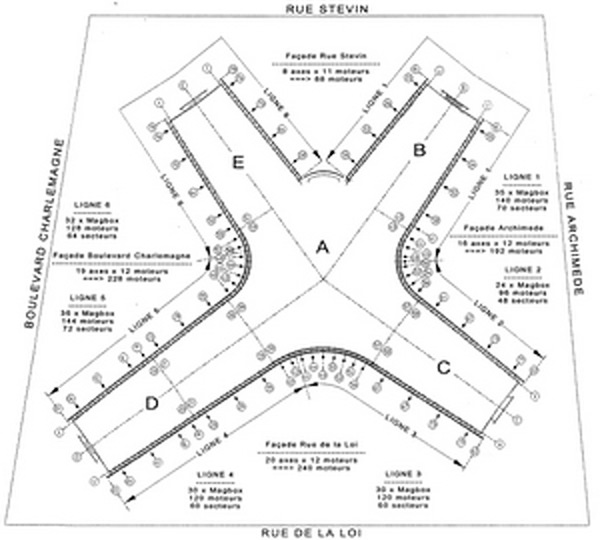 Although this first approach to the topic of the sites of power was never further developed, the phrase chosen to sell the castle touristically, "Europe's largest bastion fortress", resonated as something eerily familiar, and naturally evolved in a blooming detour. After a number of years, forced by physical and psychological conditions, I had to come to terms with my existence as worker for Europe's largest bastion fortress, i.e. a place located in 200 Rue de la Loi, Bruxelles, Belgium. I tend to view the selling of my labour force to an agency belonging to the EU Commission, in retrospect, as a self-boycott move.

Around the end of this period of inner silence and seclusion, in which almost all my intellectual activity had to stop based on medical advice during approximately one year, I visited this exhibition at MACBA curated by Teresa Grandas, Gelatina Dura [Hard Gelatin], a critical reading of the Spanish Transición [Transition]. The term refers to the process that goes from the death of Franco in 1975 to the election as prime minister by absolute majority of Felipe González of the PSOE (Socialist Workers Spanish Party, in its Spanish acronym), in 1982. A flawed and ambiguous process that failed to condemn the ones responsible for the war and proposed a carry-on, no-looking-back strategy that benefitted those who held power for almost four decades and who continued to do so, now from economic and military low-profile positions. On the walls of the exhibition halls, a list of points - number 45, by artist Francesc Torres, read:

[Why are there no Spanish artists, men or women, who say that the most radical act an artist can do is boycotting their own career?]

This approach could be seen as arguable, but is a caustic and hopeful one. It seemed to me that it provided the contents for the elaboration of a framework where psychic activity could be linked to political goals. A first move of self-boycott lead to a subsequent move of self-removal. This could be a stripped-down outline of the humus beneath the project I developed in 2016, The Berlaymont Cake. I like to think of this humus, the decomposed matter creating the depths of ground, as Haraway uses the term, stating "We are humus, not Homo, not anthropos; we are compost, not posthuman." The fortress - ironically when the EU was beginning to be termed that way due to its position towards the so-called "refugees crisis" - was the Berlaymont building, the headquarters of the EU as governmental structure made up of a variable number of states who chose at a given point to unite for economic and strategic reasons. The text I wrote for the project tried to provide a concise and direct account of the two topics I had been investigating for linking them to each other, architecture and junk food:

Bruxelles, 200 Rue de la Loi. The center of power and its architectural representation stands as a legendary monolith, celebratory and funerary. Transitioning from the mass of steel, concrete and glass to an experience defined by physical and emotional symptoms, transforming solidity and sharp edges into the effects of sugar blues, euphoria and hangover caused by the massive intake of refined ingredients from junk food. A ceremony to say goodbye, getting in and out of altered states that the psychopharmacological discourse wishes to delimit, patterns that linger like ghosts haunting life from mirages of neoliberal mechanisms. 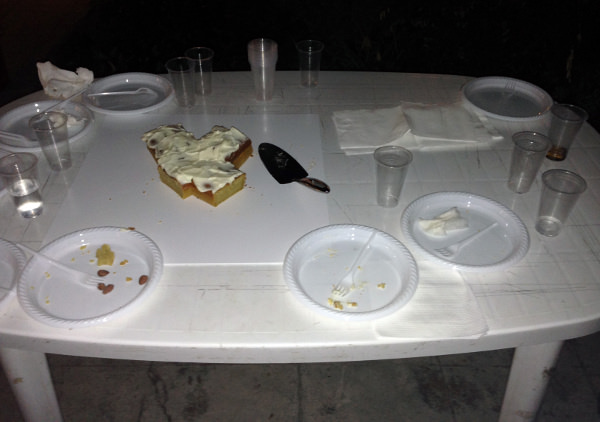 In a kind of naïve and playful mood, the massive crystallization of power was turned into a fragile, soft and over sweetened food artefact. In its easy attraction fuelled by the innate human predilection for sweet as indicator of survival, it worked as main character in a celebration of farewell. The contradiction of its nurturing/poisoning status, ingrained in the very nature of junk food, mirrored the logic of capitalism's labour system: that same wealth that is granted to the worker in exchange for her/his labour force is the one that will alienate her/his existence. At the same time, the artefact was in its own way a living-dead construction, something just born although in the verge of disappearance. This disappearance could happen as a logic consequence of its perishable foundations and structure - its ingredients, but also it could be purposefully destroyed no leaving traces behind - could be eaten. The second possibility appeared to be a poetic device for an act of occupation, appropriation, collectivisation and self-management. There was no escape, though, from this bittersweet aftermath, the sugar blues following the energy-boost caused by the peak of sugar in our blood.

An excerpt from Filosofía de la deserción. Nihilismo, locura y comunidad [Philosophy of desertion. Nihilism, madness and community] by Peter Pàl Pelbart provides a viewpoint for reading such an aftermath:

It is not a question of expressing an existing inner universe (an inner scene, a place in this scene), but of creating a state, a gesture, a path, a trace, a twinkle, an atmosphere, and in these passages (un)chained, to produce new contractions and expansions of time, of space, of corporeity, of affect, of perception, of vision, a pluriverse in the image and likeness of these displacements.

The act of resignation within the labour context could be analysed as one of these contractions. It is a contraction that generates a new and manifold state in the subjectivity. It is an antagonistic move towards power, a conquest of power in itself, of agency. And it is also an act of self-denial, a partial one at least, of fragments of one's own identity - past, present or in transition. Resignation leaves the subject naked in front of a hypothetical jury in the neoliberalism court. In doing so it empowers by that very nakedness, by creating an embodiment of all that is most vulnerable, soft and libidinal - conflictual fault lines of a flawed self trying to hold on tight to remains of psychic energy, this way conceiving and performing a political stance. 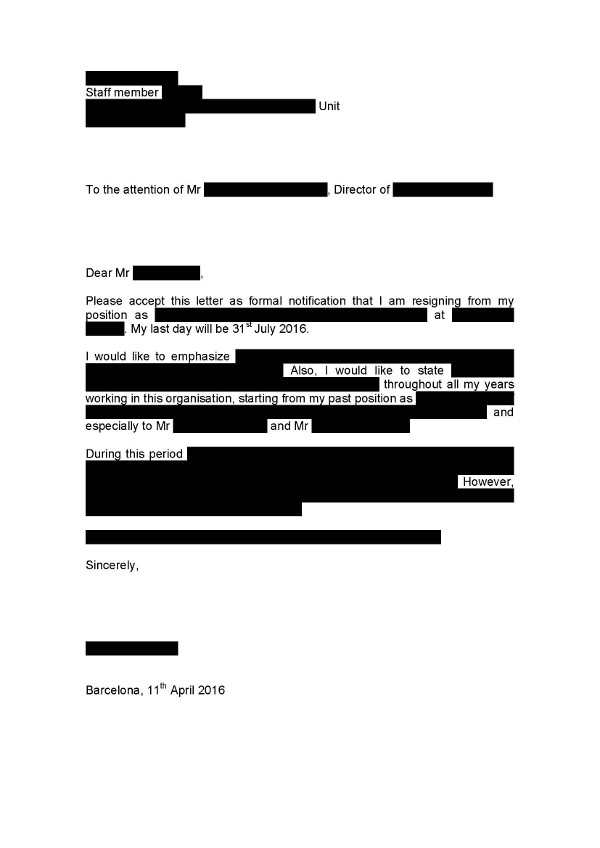