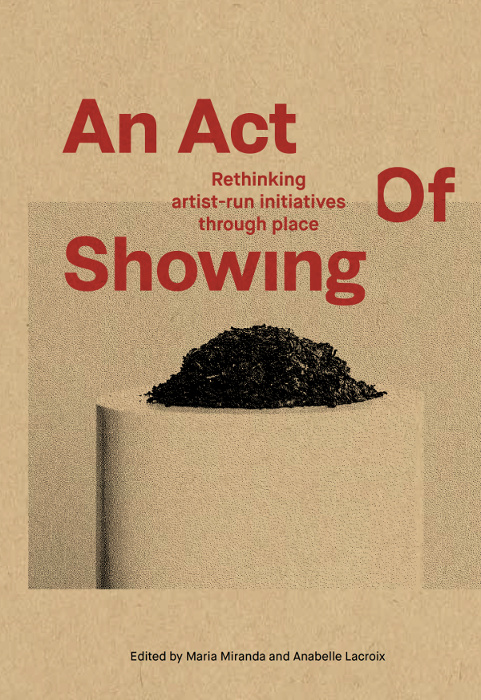 E-book 02: An Act of Showing: rethinking artist-run initiatives through place

Edited by M. Miranda and A. Lacroix, the book features newly commissioned essays by Paola Balla, Kirsten Lyttle and Dominic Redfern. It includes Chris Kraus’s essay “Kelly Lake Store” as well as creative contributions by ARIs in Australia and the Asia-Pacific on their relationship to place, and more. Designed by Elwyn Murray.
Download EPUB Download PDF

An Act of Showing: rethinking artist-run initiatives through place, edited by Maria Miranda and Anabelle Lacroix

Artist-run initiatives (ARIs) are now well recognized in Australia as important spaces to show work, to meet other artists and engage with audiences–and to continue engaging in questions around art practice and philosophies and politics of art. Once considered ‘alternative spaces’ and initially the product of radical ideologies about art and its site of exhibition, artist-run initiatives have now evolved into diverse and significant institutions for artists and audiences.

What makes ARIs distinctive from other places of exhibition is not just the key role played by artists themselves but also their physical spaces—both inside and outside. Even though many ARIs are experimenting with an online presence and projects, the physical space of the gallery has maintained its allure and artists continue to support its endless creations. This continuing support speaks to the importance of place, to being situated and to the force of material presence for artists and their needs and desires to create communities and social spaces of reflection, contemplation, conversation, interaction and simply to hang out. Yet the sort of spaces /places that ARIs occupy today are significantly different to the traditional white cube, where art was imagined as timeless and placeless. There are, of course, still many ARIs that inhabit a white space, but even then, the space is not a sealed off white cube, but often porous and leaky with artists making connections beyond the space itself. A sense that place matters for ARIs—in particular ways for each, given their history and location—was a starting point for the project.

This book is the third and last phase of a project which consisted of an exhibition and symposium held at Testing Grounds, Melbourne (Naarm) last year, 2017. The project aimed to shift the usual focus on internal organisation and funding to thinking about ARIs through place. This was because we, as editors, sensed that there was more to ARIs than tended to be talked about and so a different focus was needed to approach it. We turned to place because it brings us to the local and to the on-the-ground experiences and ways of doing of artists and audiences. This has turned out to be an immensely productive focus. It has allowed ARIs themselves to respond in very different ways that are meaningful to them. And especially it has allowed for political engagements. That is, the idea of place is necessarily a political idea as it proposes that local action and ideas matter. And this was the proposition of the project – that physical, material place is of the greatest importance; that it still matters even as the global centres of capital demand we pay the Empire its due; in other words, it shakes up the centre/margin relationship and reminds us that where we are, is where we are.

And where the project took place was on the unceded sovereign lands of the Indigenous people of the Kulin nation. And so an important aim of the project was to connect and begin a dialogue with Indigenous artist-run spaces–often not included in the tacit understanding of the term ‘artist-run initiative’.

The book features newly commissioned essays by Paola Balla, Kirsten Lyttle and Dominic Redfern, and essays by the editors, Anabelle Lacroix and Maria Miranda, as well as the reprinted text Kelly Lake Store, by Chris Kraus. The book also includes creative contributions by artist-run initiatives (ARIs) from across Australia and the Asia-Pacific, and more.  The book is designed by Elwyn Murray.

An Act of Showing: rethinking artist-run initiatives through place accompanies and expands upon the eponymous exhibition and roundtable symposium held at Testing Grounds in Melbourne from 17 – 27 May, 2017 developed as a collaboration between Maria Miranda and Anabelle Lacroix. It was initiated by Maria’s Australian Research Council (ARC) project The Cultural Economy of Artist-run Initiatives in Australia.

We acknowledge the Wurundjeri People of the Kulin Nation as the sovereign custodians and ongoing carers of the land on which this book was made.

For more information about the project please visit: https://www.act-of-showing.net.