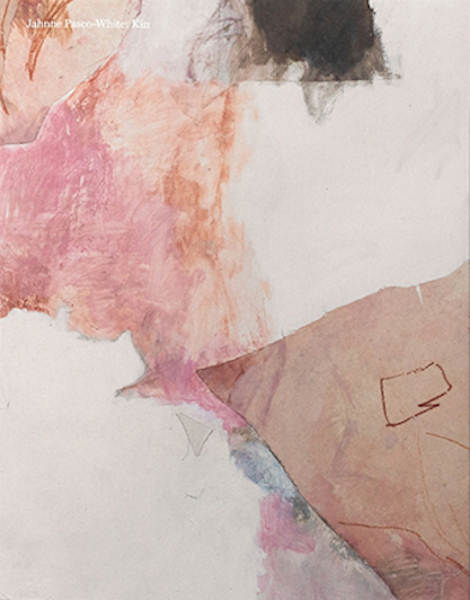 Jahnne Pasco-White: Kin documents the artist’s pre- and post-pregnancy paintings and drawings, alongside a dozen essayists who interrogate the limits and possibilities of kinship.

This edited collection both documents and critically reflects upon a three-year painting and drawing project by Jahnne Pasco-White. Titled Kin the project arose from the artist’s experience of pregnancy, childbirth, breastfeeding and parenting, yet—as the texts in this volume by the artist and eleven other contributors attest—it is the impulse to be actively making kin beyond the nuclear family that braids the threads of this volume.

Whereas the everyday meaning of kin, according to the Oxford English Dictionary, refers to ‘your family or your relatives’, Pasco-White calls for an expansive sense of kinship ‘activated across blood ties as well as be intergenerational, not confined to any prescribed limits of the nuclear family.’ Thereby situating her body as enmeshed and co-constituted with other living and non-living beings and things, for Pasco-White making kin has decentred rather than entrenched human-centeredness. Although the artist’s role in the unfurling of a life was a transformative moment for Pasco-White, for many people it cannot or need not be (see Taylor 2015). For Pasco-White, this heightened state of ecological attunement has transformed how, when and with what each work has been made, whilst simultaneously demanding that the artist reappraise the applicability of these ideas within the confines of a contemporary painting practice. Through paint(ing), Pasco-White’s kinship connections are not merely to her body and those held in relation to it, but to those impacted by the industrial processes that manufacture, package, distribute and deliver the very materials she incorporates into her paintings. Hence, Pasco-White’s most recent works—long-having addressed the themes of materiality and temporality through her labouring of delicate supports—now feature fleshy tones from boiled avocado skins and the earthy tones from feral fruit, whilst still evidencing traces of more toxic matter, such as oil pastels, PVA glue and cement oxide.

The paintings and drawings profiled in this book survey the period from January 2017 through to November 2020, including a long-form essay by the artist titled ‘To accrete a surface’ that I decided to republish (Pasco-White 2018). This body of work signifies a significant period of change in the artist’s life and practice, but also a remarkably productive one. Whilst numerous paintings have been omitted having been acquired by private collections prior to public exhibition, several of the artist’s most celebrated and adventurous works are documented in this book. Among them is a twenty-five-metre tryptic that enveloped all four gallery walls, as well as the artist’s first in-situ wall works that variously span up to twelve-metres in length, and a network of more than thirty works draped from gallery ceilings in a loosely procession—entirely eschewing the wall now and rather activating the space between them—so as to affirm the idea that Pasco-White’s art practice is relational yet somehow also unbounded.

The texts in this volume are suitably unbounded by either academic discipline or personal experience. This is not a book of art theory. And nor is it a book about mothering. Rather, this is a book in which the artist and her interlocutors interrogate the possibilities and obstacles to being ecological at painterly scales. As such, this book intends to forge new connections between Pasco-White’s practice and such diverse things as border walls, parasites, composting, fermentation, contamination, microbes, housework and eating. Affirming the knots of kinship with which the artist and her interlocutors are entangled, as well as the interplay between text and images, I have arranged the book according to four streams of thought: embodiment; relationality; vulnerability; and care. Drawing on Pasco-White’s palette, rather than attempt to contain these four streams using formal sections headings, the transition is marked by different paper hues drawn from the artist’s palette.