Alinta Krauth is a new media artist from rural Queensland, and teaching fellow at Griffith University.

Walking Unexpectedly is an interactive net artwork that reflects upon a fieldtrip to Chillagoe, Australia, in August, 2013. Each of its ten artistically altered maps of the Chillagoe area, locatable through a side menu, have interactive GPS nodes that, when hovered over or touched, display blocks of text and images. This non-linear text is a hybrid of personal and academic writing. My time in Chillagoe caused me to consider, in unexpected ways, the performative act of walking, and the concept of home within place, drawing on the writings of de Certeau, Csikszentmihalyi, Malpas, and Phillips, among others. Due to its digital nature, this interactive artwork serves as a way to experience Chillagoe through a variety of senses, and through a variety of media – through sound, text, interaction, and visual art. These reflections on walking, looking, being, and being ‘at home’ are documented in Walking Unexpectedly’s non-linear text/story, which is also supported by an interactive visual map. The map has a birds-eye-view orientation, and includes a textual mouse-follower that leaves legible and illegible traces of where you have trudged while ‘walking’ between GPS nodes. 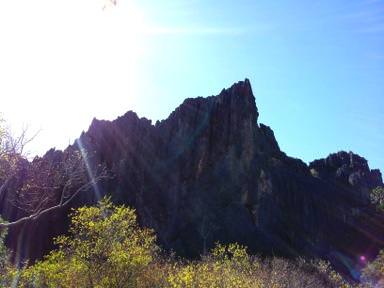 This interactive online experience began as a question.

Several years ago, a friend asked me what I would want to do over the next year, if I could do anything at all? After some thought, my answer was, “I would like to work on archaeological digs”. I liked the idea of working with my hands, doing physical labour, while also contributing to knowledge and discovering lost pieces of history. However, since I had no experience in archaeology or geology, I was assuming this would be a recreational pay-to-work opportunity that would be completely outside of my academic research. That was, at least, until I was introduced to Paul Taçon, professor of Rock Art and archaeology at Griffith University. What I did have in my favour was a background in the arts, and experience in conducting mammal surveys across South East Queensland. At the time, Prof. Taçon had a PhD student, Nicola Winn, working in Chillagoe, two hours west of Cairns in North Queensland. She was surveying the Aboriginal Rock Art of the region at a time when limestone mining was causing the area’s rock faces to be lost. 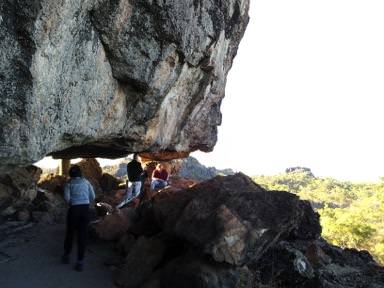 One of the remarkable things about Chillagoe is that it sits on the border between several different Aboriginal tribal lands, which enabled it to serve as a trade passage between groups before white settlement. Of particular interest to Nicola were trade connections between the Chillagoe area, and tribes who lived near the ocean. Some potential connection to this was a shell motif that seemed to continually appear on the limestone bluffs of the area. Since it was a crossroads between communities, much of the rock art was also believed to serve as maps. Unfortunately, the situating of Chillagoe at this crossroads was, at the time that I visited, causing problems for the traditional families of the area. They could not agree on who had true traditional ownership rights for the town, and as such, Chillagoe was without legal traditional guardianship, and was thus much more susceptible to being mined for cement and marble (Winn: 2011; and discussions with Winn and Taçon at the time). 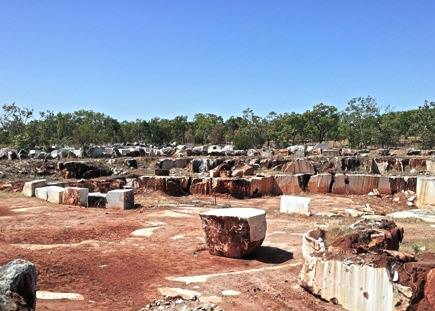 Prof. Taçon, knowing my interest in becoming involved, enlisted me to join him in a small team that flew up to Cairns to help Nicola for two weeks. She had set herself the gargantuan task of checking every limestone bluff in the area for Aboriginal art, and she was running out of time. This is how I ended up in Chillagoe for two weeks, staying in the home of a local, and spending each day in the blinding Chillagoe sun with eyes metaphorically glued to rocks. 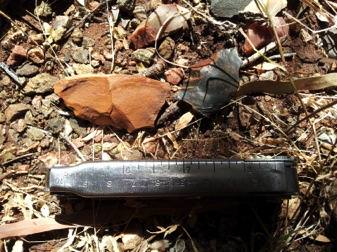 Outside of this fieldwork trip, I am a digital artist. I make, among other things, interactive artworks that are often browser-based, meaning they are viewable on the web. Net Art, as it is known, has been an important facet of contemporary digital arts since the early 1990s. I often create interactive maps, due to my affinity with geography and place, and I often use text, sound, and hand-made imagery. In doing so, I draw from the fields of digital literature and sound art in order to make small interactive worlds. So while I wasn’t an official artist in residence in Chillagoe, I came with this particular set of skills and knowledges. I also had a particular interest in proprioception and kinesthesia. Proprioceptors are sensory receptors in the body that give the body the ability to perceive itself. This is closely tied to kinesthesia, the ability to perceive where you are in relation to your surroundings1 (Proske and Gandevia: 2012). 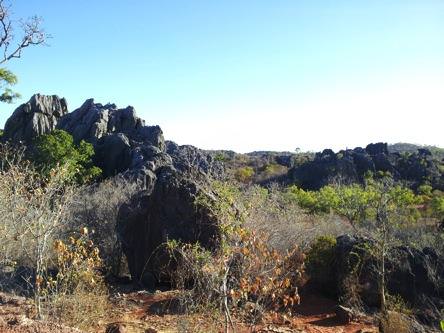 While the town of Chillagoe is small and flat, the area around it is covered in large limestone outcrops. While they are massive and foreboding to be near, their dark colour and pockmarked walls covered in spiked bushes allow them to disappear into the landscape. In times long past, these structures were underwater, and this is what gives them their unique coralline appearance, and sharp jutting edges that threaten to twist ankles and pull flesh from hands that climb. There were other things about the landscape of Chillagoe very different to anything I had experienced before: the large termite outcrops, the soft broken rocks underfoot, the head-high dead grass, the sharp coralline plateaus, the thick spikey brush that needed to be pushed through. I needed to learn to understand these situations very quickly with my body, particularly with my feet, so that my eyes could concentrate on the fieldwork at hand. 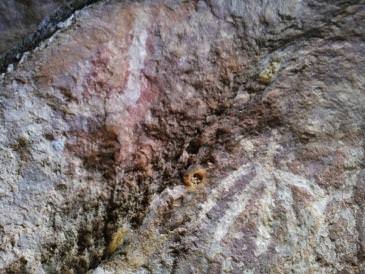 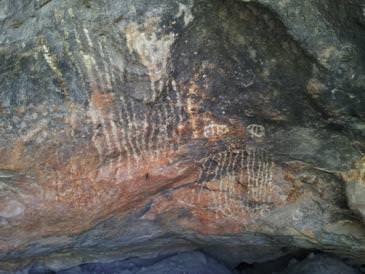 I became very good at spotting the difference between red ochre and the natural red of the rocks. At first it appeared an almost impossible task, but in a very short time my eyes adjusted to the slight variations between natural and human-made patterns. Each day we would head out as a team – myself, Nicola, Paul, a student completing her Masters degree, and Nicola’s second supervisor. We would meet with a few people who were studying geology in the area, and sometimes were also accompanied by the area’s traditional families. We were not just interested in the outside walls of these rocks, as within them were often deep caves, some receiving no light at all. Rock Art within these no-light caves had never been documented before, but we were hopeful we would discover something completely new. 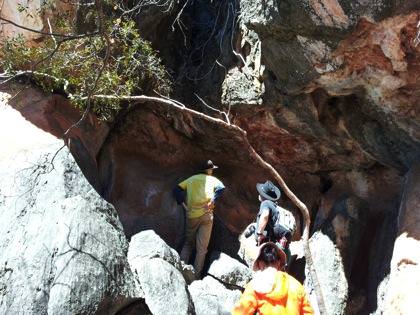 I began documenting my time in Chillagoe in several ways. The sharp crunch of the grass when stepped on, and the raucous joy of birds, caused me to start recording audio of these incidents. I would record myself walking and listening, resulting in hours of audio of different crunches and chirps. I took hundreds of photographs of the landscape, and I also kept a written diary on my smartphone. I would notice that much of this documentation was concerned with walking, and the act of thinking through my feet. I suppose this was unsurprising, since we spent around eight hours per day walking through the bush. Having already researched the human body’s proprioception, I found myself applying this to the act of walking in an unknown, and very geographically and geologically particular space. I constantly asked myself what part of my body I was thinking with, and what part of my body was connecting with the surrounds. 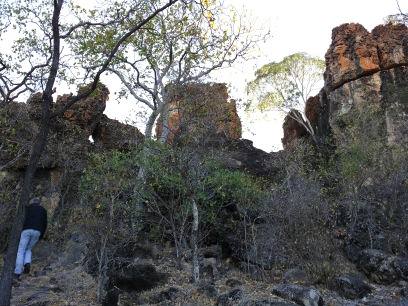 Upon my return home, I wrote the text that you now find in my interactive web artwork Walking Unexpectedly, looking at the act of walking, the concept of home, and the concept of walking in land where one, perhaps, doesn’t belong. While many things stuck out in my mind as highlights from my fieldtrip to Chillagoe, I felt that it was my take on the act of walking in Chillagoe, and my ability to create digital art, that were my unique contributions. My position as an artist made me unlike the others on this fieldtrip, but it gave me a different set of tools from which to explore the land. Exploring walking through contemporary art and academia is not new, and the practice-led-research of walking in Chillagoe aims to contribute to this important and growing area of creative and scholarly concern.