By LISA HALL and SALOMÉ VOEGELIN

Salomé Voegelin is an artist, writer and researcher engaged in listening as a socio-political practice, and as methodology for a hybrid knowledge base.

By Lisa Hall and Salomé Voegelin

This piece is at once an essay, a documentation of a work and an auto-ethnographic journey through the field of an embodied recording practice. It retraces, comments on and further narrates 'And it Tastes like Hair', the sound and text installation produced collaboratively by the authors for the exhibition Translating Ambiance, curated by Jordan Lacey for the Yarra Sculpture Gallery. 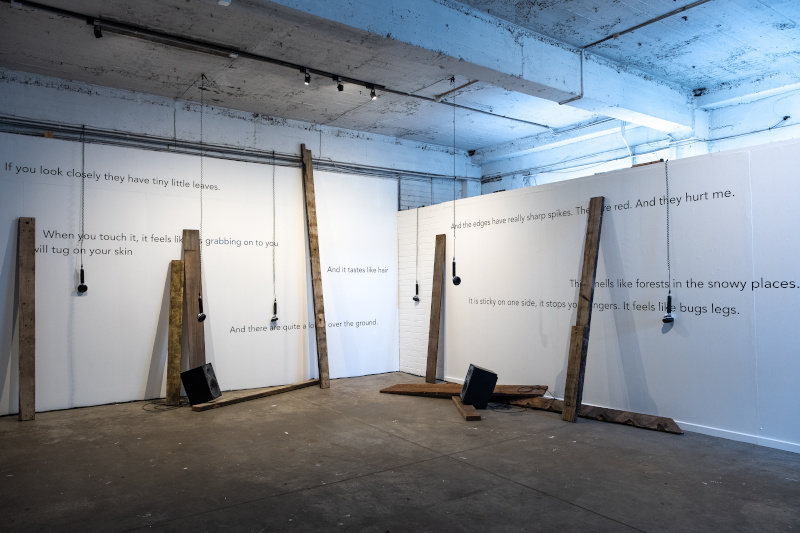 In retracing the work's steps we consider its construction from the sound of dry leaves crumbling; from the body recorded and overheard in the field; from a daughter's descriptions of nature felt; with John Gough's Meteorological Journal from 1808, kept in the archives of the Wellcome Trust, that inspired its journey; and from the sound of the recording and play-back technology used. It engages these fragments through their contacts and connections, which also built the installation. Since, these were the things we went out to search for and found up close. So close as to leave no space between us and them, but only the concorporate reciprocity of our touch: the skin of the plant on the skin of the finger, the crackling on the eardrum, the air hitting the back of the throat, feet at the point of contact with ground, leaves on the taste buds, small hairs everywhere... And so we listened to their proximity in order to hear in the small sounds of plants up close, and in the close up of the body recording, the radical reality of a possible world made together by human and non-human things. In this sense this piece writes an auto-ethnographic journey about and with these fragments and from the way they inter-are. It hopes to come to understand the working processes, their translations, and the possibilities of their correspondence and interaction, as a space for a different artistic and political imagination.

Journeying into the wild

And the edges have really sharp spikes. They are red, and they hurt me.1

When you touch it, it feels like it’s grabbing onto you.

It will tug on your skin.
And it tastes like hair.

And there are quite a lot all over the ground.

half building, half dismantling

half builds, half destroys

performance of matter together 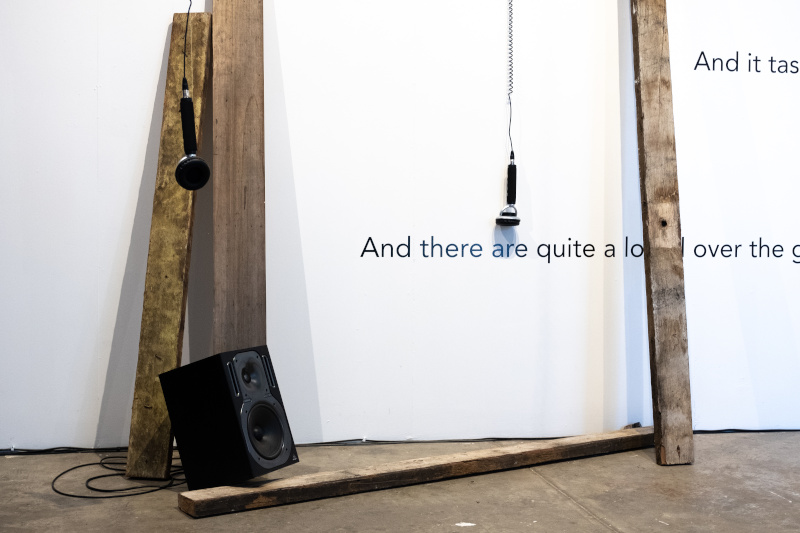 Leaving the body in the wild

We are out now. We have left the woods, the desert, and the various wildernesses recorded. What remains is our passing contact, recorded, restaged, put into words and remembered. As work and as documentation: sounds playing through six mono headphone channels and a stereo speaker set up, framed by haphazardly leaned and propped up timber boards and lettra-set words. All captured in photographs and in descriptions.

But where is the body that is not framed by the subjectivity of the artists, recognizable and named, but is the bodied materiality of recording, made from the same stuff as the world:2 the thistles, broad grass, the desert sand, the heat and rain, and the soft heeled shoes worn in order not to be heard. Have we left that body in the wild, on the trodden-on brambles - or have we left the brambles on our bodies, evident still by invisible scratches on our skin?

The production of the work demanded proximity and closeness and framed the body recording as an auto-ethnographic body that is an exploratory device, which comes to know through its sensory corpus, and in its being with (Schulze, 151 and 157). And that creates knowledge from this interbeing with every other thing as an epistemology of shared materiality in the in-between.

This auto-ethnographic knowledge is phenomenological and sensorial. It admits the non-arbitrary ambiguity of one's own life as critical potential to discourse. It does so by abandoning critical distance and instead assumes a critical proximity: to be as mobile 'I-slots' the bodied material and conduit of sensorial sense. (Shildrick and Price, 9)

This is an epistemological but also an ethical position, concerned with what knowledge is, who it belongs to, what sense it carries and how it is made available.

Is it in the work or in its documentation? in the images we have of it or in the more ephemeral ones we keep in our memory?

Does the potential of this auto-ethnographic I-slot remain in the work, ready for reperformance by the audience, who so becomes a consecutive auto-ethnographic device for an alternative sensorial knowledge of plants and environments? And if so, can it trigger a different engagement with the wild that challenges and resists objective sense and the separation of a true nature, to instead co-extend as bodied materiality in performance and as a plural in-between - 'mobilising a series of differentially embodied and multiple I-slots' in the wild? (ibid.)

So maybe the body does not literally remain in the wild, but creates a co-extensity that as device of a sensorial knowledge and as performative possibility, brings other bodies into its proximity and knowledge, to make the woods, the desert, the plants, the weather and the recording, continuous and available as an assemblage of cross time concorporation rather than as the over there to be recorded, composed and played back here at a specific time.